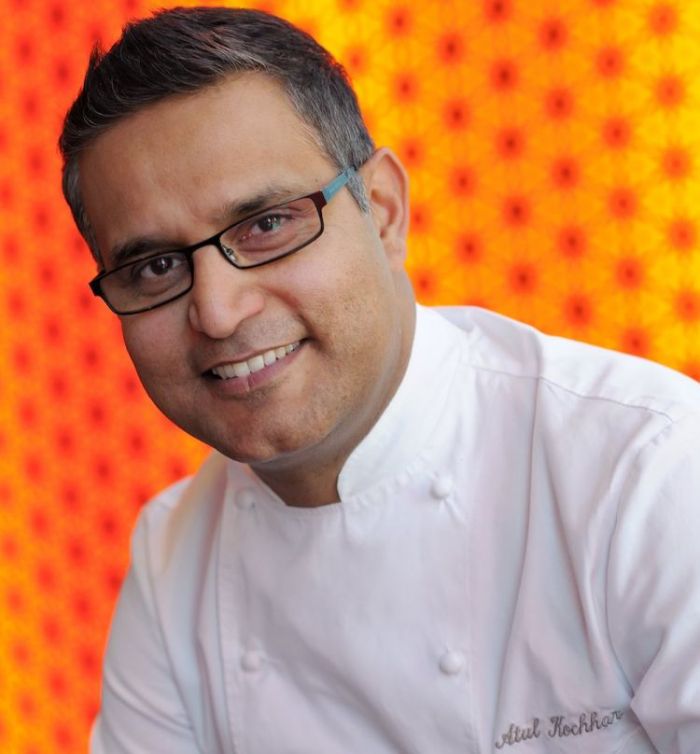 Atul Kochhar is one of the best Indian chefs on the planet and his restaurant in Dubai – Rang Mahal – is up there with any Indian restaurant anywhere. You really should try it.

Notably, Atul was also only the second Indian chef to have their restaurant awarded a Michelin star – Benares restaurant in London in 2007 – so he knows what it takes to win Michelin recognition. Vogue Man asked him about the possibility that Michelin is coming to Dubai, where are the best places to eat in the city, why Indian food doesn’t get enough recognition and the question that few seemingly want to address – are there simply too many restaurants in Dubai?

What do you make of the high-end dining scene in Dubai?
It’s getting better and better. In the last couple of years we’d seen that people were not thinking of fine dining, with more wanting casual dining, and there’s nothing wrong with that. But I’m seeing that people are seeking a better experience and turning back to fine dining.

We’re taking a U-turn and going back to the older systems. In culinary terms, we had Nouvelle cuisine coming in so everyone moved towards that, but slowly it vanished and we absorbed a sense of that into our main cuisine. The same thing happened with molecular gastronomy, and a few essences of that have now been absorbed into fine dining.

You have a restaurant here and in London (the Michelin-stared Benares). How does Dubai compare to London right now in terms of quality?
I feel that in terms of quality Dubai is not very far from anywhere. People living here might feel that we are behind London or New York in terms of trends, but they come here pretty quickly. A lot of people who own restaurants here also have places in London or New York, and I always tweak this place (Rang Mahal) to make sure that it’s the same as what we are doing in London. I don’t think we are lacking here in Dubai.

There’s a lot of serious talk that Michelin is coming to Dubai. If it does, do you think there are a lot of places that would get stars?
At one-star level there will be many, and I think there will be a few two-star ratings as well. The one that really stands out for me is Nathan Outlaw’s place at the Burj Al Arab, Al Mahara. That’s a spectacular place and he’s doing exactly what he does in his restaurants in Cornwall in England. Great food and his head chef, Brett, is amazing.

Your restaurant in London, Benares, has a star so you must be able to compare the quality between there and here at Rang Mahal.
It’s pretty much in line. The head chef here, Amrish, does a little more than I would do in London but he’s got an amazing grasp of what people want in this place. Half of the success of a restaurant comes from understanding what people want. A lot of chefs fail to address that what they want on the plate is not always the same as what diners want, but Amrish gets that right.

Do you think that if Michelin came here it would be a good thing for the city?
Michelin would be a fantastic thing for the city. Right now there is no definitive guide. At the moment the guides to restaurants in Dubai are very commercial, and done for various reasons. But Michelin puts a sense into people as to why you should visit that place. The star system has been thought about, it’s debated, and multiple visits to restaurants are made before they think of awarding you one.

At the moment the guides to restaurants in Dubai are very commercial, and done for various reasons. But Michelin puts a sense into people as to why you should visit that place.

Michelin coming to Dubai would be a big plus for the city. I’ve been talking to chefs and everyone says they have heard it’s coming, but nobody has heard from Michelin and when I had the chance to ask a Michelin person directly, they said they didn’t know. Sometimes they are quiet about these things, but when they were going to do Singapore they talked about it. I know for sure they are looking at Bangkok at the moment.

We see a lot of really great restaurants here that are, on many nights, less than half full. Is that because there are too many restaurants here for the population, because they are overpriced, or is it something else?
Pricing is directly related to what people earn in that areas and Dubai is fairly affluent and well-to-do as a population so I don’t see any problem there. The number of restaurants versus population… yes, there could be an issue. And there are more and more opening. There’s nothing wrong with that as long as the law of nature takes place and the ones that are the weakest are shed and don’t stay.

If you wanted to have a meal for Dhs30 in Dubai that’s possible, just as you could eat somewhere with no price limit. However, people do choose over a period of time which ones in that price range stay and which ones don’t. It might be a really good restaurant but if it’s not competitive enough, or the location is not right, or services connecting to the restaurant are not right then people will say it’s a hassle to go there.

Dubai does have far too many restaurants

Are we going to see lots of restaurants shutting down because of this? It seems that every new hotel that opens has to have several restaurants and there are a lot of hotels on the way.
The market will adjust — it has to. And when people are not coming then what are you going to do? You won’t carry on with all the losses. If my restaurant was not doing well and losing money I would think of shutting it down or changing the concept.

One of the problems in the Middle East and Asia with the hotels is that they believe they need to have six, eight or ten restaurants, whereas in Europe they don’t. These days they are building beautiful five-star hotels and they have one dining room which will serve breakfast and some snacks through the day and that’s it. Then they lease out spaces to chefs like me or is a hotel opens in somewhere like Soho, they don’t need a restaurant – you walk out the door and it’s laden with places to eat.

That’s what should happen, and I said that a good 12 or 15 years ago in one of the hotel conferences in India and hoteliers laughed at me. I spoke recently and they agreed with me and said that’s now what they are looking to do. Very few hotels come here and show a passionate desire to run restaurants well.

So following on from that, what trends are you seeing in the restaurant industry and high-end dining?
Some of the old practices are coming back and something that I have adopted as well is getting back to proper service. In the past there was too much “Oh, the guests will help themselves” as you put out small plates and let them share. That’s slowly going away and people are appreciating that.

In the past there was too much “Oh, the guests will help themselves” as you put out small plates and let them share

Every year we have things like the Top 50 Restaurants in the World and they’re all amazing restaurants, but we rarely see Indian food represented in there, despite the fact that they are some brilliant Indian restaurants around the world. Why no love for Indian food?
I think the only one that made that list was Gaggan who does, kind-of Indian food, but molecular gastronomy and he’s announced that he’s closing his restaurant because there’s no future to it. That’s clever, he’s doing what Ferran Adrià did and has seen the time is coming. In Asia’s 50 Best Restaurants there’s one from Delhi and one from Singapore. But you’re right, there aren’t that many and I don’t know why.

But it took Michelin over a hundred years to recognize that an Indian restaurant could be included so perhaps the Top 50 Restaurants is just going through that phase. They work via votes from judges in different regions, so while Indian food might be quite well known in some regions it’s not in others. It hasn’t make a mark in China – they see it as a second- or third-rate cuisine – and in America you can’t even begin to tell them how Indian food works – America has no understanding of Indian food. So out of 50 judges if 35 don’t understand then it’s a problem.

Which restaurants overall do you rate here in the city?
Coya is excellent. As is the Turkish place Nusret, and Toro Toro. I went to the later many years ago and then recently went back and they still get it right. They’re clever about how they present themselves and what they do. Prime 68 is a really good steakhouse and Armani Ristorante at the Armani Hotel is spectacular. The Indian restaurant there, Amal, is also good, even though they’re competition.

I love Calicut Paragon in Karama – it takes me back to the old flavors and that’s sometimes inspirational.

Have you tried the Indian street food here in Dubai?
Yes, it’s great. Farzi Café is really good, and I’ve enjoyed some of the food trucks that came out during the food festival – they’ve done very basic things like samosas and Indian fish and chips and I’ve enjoyed that. I love Calicut Paragon in Karama – it takes me back to the old flavors and that’s sometimes inspirational. Their fish curries are excellent.