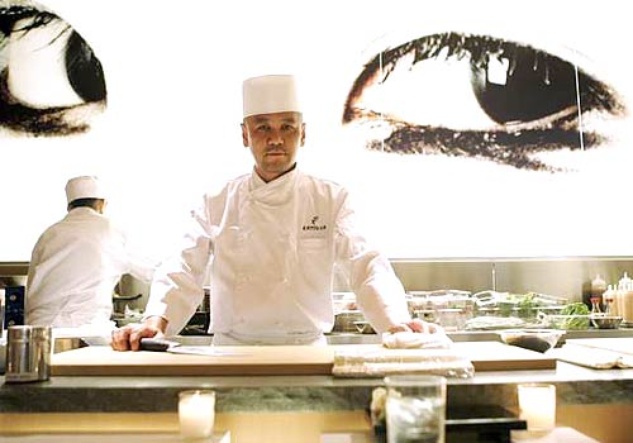 Master sushi chef Katsuya Uechi was born on the Japanese island of Miyako, and while you might not have heard of him, or the place he comes from, you are likely to have eaten some of the food he had a hand in influencing.

In the world of modern ­sushi, this man is one of the most ­significant chefs to have shaped the dish as we know it, and he has now launched a restaurant in Dubai.

After moving to Los Angeles in 1984, having undertaken apprenticeships in Okinawa and Tokyo, Katsuya started working at local restaurants before opening his own place on Ventura Boulevard, in an area known as “Sushi Row”. Despite this fierce competition, Katsu-Ya (as the original venue was called) became a huge success.

The Zagat guide still refers to it as: “The iconic place that started the innovative sushi craze, where celebrities and families go elbow-to-elbow every night.”

In 2006, it received the highest- possible Zagat Survey score. It was here, then, that many of the modern innovations in sushi were born.

The dishes that made it such a hit were the result of studying what Los Angeles liked and adapting sushi classics for American sensibilities. Much like Hollywood remaking a Japanese film, Katsuya had taken something from the Far East and reinterpreted it for a western ­audience. Yes, there are those who will always prefer the subtitled purity of the original, but for the masses, this offers the best of both worlds.

“Yes, compared to Japan it’s very different,” Katsuya says. “Because all of our countries have different tastes and a different food culture, I had to adjust my dishes to suit the American taste.”

While the likes of Jiro Ono and other top sushi masters in Japan receive Michelin stars for their kitchens, Katsuya has created a cuisine that works in a totally different way.

“Of course, I also use the freshest fish, that’s the most important, but taste-wise we changed things – you know, they don’t have California roll in Japan,” he says.

Making changes was not always an easy thing to do. “In the beginning, I had no idea what would work or not, so I tried things little by ­little and served them to customers, and if they liked it, then it went on the menu,” Katsuya explains. “Sometimes it just doesn’t work, not everything goes down well … in fact there are so many that haven’t worked.”

The dishes that made it onto the menu are proven winners, and a few are now considered signatures.

“The seared spicy albacore with crispy onion I created for my first restaurant – straight away it’s a big hit,” says Katsuya. “But now you go to any sushi restaurant on the West Coast of America and you’ll see they have copied that.”

He also cites his crispy rice with spicy tuna and the edamame hummus he has created for his UAE outlet, where he is keen to adapt to western tastes.

“For those who are new to sushi, or perhaps just don’t like eating raw fish, I have a baked crab roll, and ­instead of seaweed I use a soy paper, so that’s an easy way to start,” he says.

As for why are tastes in food so ­different in Japan and the West, Katsuya expllains: “It’s a very ­different food culture, and that informs everything. For example, a ­Japanese soup is made with ­seaweed and some dried fish, but in western culture, the soup is usually made with chicken, beef or vegetables.

“And the first thing you taste in a lot of Japanese food is soy sauce, but in the West? Butter. So sometimes I mix them and it tastes good.”

Katsuya’s experience is a business lesson in adapting a product to a new market. He now has restaurants in multiple locations in the United States, and in Qatar and Bahrain.

But as society becomes more globalised, perhaps now is the time to bring some “Japanese-only” tastes to the West? He furrows his brow and says he doesn’t know, in a tone that hints he is pretty sure it is not.

What do the Japanese make of the food he produces?

“Some say it’s not sushi, but they like it; others say it’s great and I should bring it to Japan and it would be a hit, but … I don’t want to do that,” he says.

Dubai has a plethora of ­Japanese restaurants, just as LA did before he launched there in 1997. Yet Katsuya is confident he can stand out from the rest.

“The food here is a little bit different to the other Japanese places, and we make some unique dishes in a good space,” he adds, gesturing to the room we are in. “The design of the restaurant is by Philippe Starck … it’s a unique design … not ­really Japanese, but you can taste Japanese.”

In a way, that encapsulates why Katsuya and his restaurant, in all aspects of his approach, worked so well in the US and resonate around the globe.