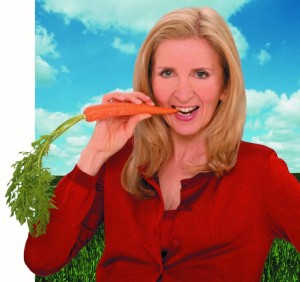 Nagging reality TV makeover shows have been wagging their collective finger at viewers elsewhere for years now. And one by one they’re coming over here too. You Are What You Eat is the latest series to tell us what we’ve done wrong this time.

People on television just can’t seem to stop telling us what to do, and for some reason we can’t get enough of it. If they’re not ordering you how to train your unruly brat of a child, they’re vilifying you because your house isn’t clean enough. Then they’ve got the nerve to send two snide women around to point and laugh at your wardrobe and tell you what not to wear. But don’t you dare buy any new clothes until you’ve got in shape and started eating properly, you bloated, gawping manatee. The crime of being fat and unhealthy is perhaps the one we get shouted at most for, and the ringleader in this circus of self-loathing is a woman named Doctor Gillian McKeith, with her series You Are What You Eat.

The premise is simple. Each week a big wobbly fatty has their week’s shopping laid out on a table and a humourless nutritional expert looks at it, shouts at them and then whips them into shape with her ‘special’ holistic diet.

However, it seems that McKeith is no more of a medical practitioner than Doctor Hook. She reportedly received her PhD via a distance-learning programme from the (non-accredited) American Holistic College of Nutrition, Alabama, where instead of taking an exam you just pay $60. Or so the Guardian newspaper in the UK claims. She’s since dropped the ‘doctor’ part of her title (after false advertising claims) but all that is not really important as the show doesn’t hinge upon her applying scientific fact to the problem. That would be boring as everyone already knows that all you have to do to lose weight is eat less and exercise more, but that’s not very good for television. Instead, it’s all about McKeith bullying her victims and forcing them to eat some truly hideous looking concoctions. Treats include quinoa, amaranth, millet, buckwheat, flaxseed, garbanzo beans and worms. Actually, not the last one, but this programme does have the feeling of holding down the fat kid at school and making them eat a few wriggly ones.

One poor woman sobbed: ‘I had to boil mung beans all day long, which took hours, made the flat smell horrible and tasted more like the gravel at the bottom of a fish tank than food.’ If being forced to eat mung beans isn’t cruel enough, the subjects are sometimes ‘treated’ to colonic irrigation, and the dodgy ‘doctor’ also claims that she can diagnose people’s ailments by examining their tongues or their excrement. In fact, she comes across as a rather nasty woman all told, but unlike Simon Cowell laying into a wildly off-key singer with occasional wit, this feels a bit more nasty and almost cruel.

Despite the rest of You Are What You Eat feeling like a crude infomercial to help McKeith sell some of her personally endorsed, holistic ‘snake oil’ products, it’s a strangely compelling piece of television, albeit mostly for the wrong reasons. Watching a woman (who looks like a cross between a pantomime witch and a school teacher) nag someone shouldn’t be this entertaining, but it ends up being something you struggle to turn away from.

At the end of most episodes, the contestant looks like they’ve just been chased though a brer patch by flabhungry wild dogs, but crucially have nearly always lost weight. It’s probably though the sheer terror and exhaustion of being force-fed the sort of food that usually causes riots, but occasionally there are tears of joy. Despite the televised cruelty it’s hard not to be warmed by the sobs of happiness from the sort of people who only weeks earlier were crying because they’d just run out of Jaffa Cakes.

McKeith’s book that accompanies this series has sold well over a million copies, so it’s clear that we’re all a bunch of masochists who fall for pretty much anything we see on the telly. And it’s even more evident that television programmes that nag and bully members of the public are going to be with us for quite a while yet. •

From Time Out, June 2007 – Click here for original PDF