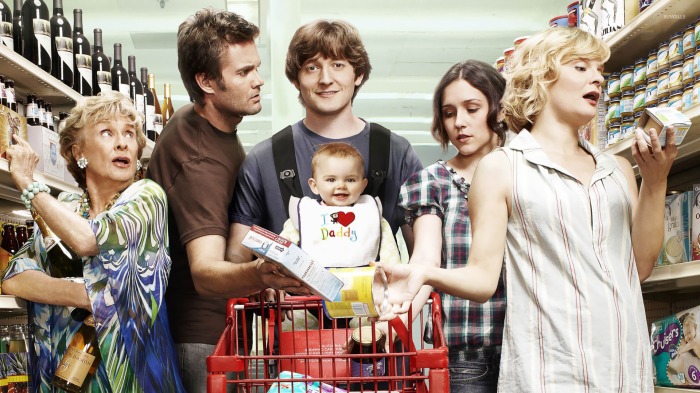 The latest in a line of white-trash sitcoms, and why it’s more real that reality TV.

In times like these when the rich are screwing the poor more than ever, it’s nice to be able to root for the underdog. But underdogs on television are increasingly appearing via reality TV, where it’s often hard to feel that they’re not just having their dreams/desperation/situation exploited for the entertainment of others. In scripted television, however, there’s a good tradition of American working class sitcoms.

Shows like Married With Children, Roseanne, Grace Under Fire, Malcolm In The Middle, My Name Is Earl have all depicted American blue-collar workers, (or simply white-trash in some cases) but have done so with warmth and affection. You were on their side, even if you wouldn’t want to live side-by-side with them. Raising Hope is the latest, and it’s the best there’s been for some time.

In fact, it’s the best there’s been since My Name Is Earl was abruptly cancelled and comes from the same creator, Greg Garcia. The premise is typically screwball: 23-year-old Jimmy has a one-night stand with a fugitive who then gets captured and sent to the electric chair, but she gives birth just before leaving him to raise the baby alone. After finally rejecting the name Princess Beyoncé, the baby is called Hope, giving the series its title. The original title was to be Keep Hope Alive, which was better but deemed a little too on-the-nose for network TV.

The clueless Jimmy (played by newcomer Lucas Neff ) struggles to come to terms with being a father while getting loving but equally misguided help from his white trash parents who initially object to him keeping it: “Now, you take that baby to the fire station and you hand it to them. Don’t just throw it in the dumpster!”

Martha Plimpton (Stef from The Goonies) is great as the no-nonsense, chain-smoking mum, Garret Dillahunt (Deadwood) is the deadbeat dad while Academy Award winner Cloris Leachman — now 84 years old — is great as the deranged grandmother who lives with the family. The writing and humour — very much in the vein of My Name Is Earl — is sharp and wonderfully dark but it works because you like the people.

Creator, Greg Garcia says: “I like to watch people on TV that I’m rooting for, not rooting against. I try to create characters who have real struggles, but are good people underneath everything. They just feel a little bit more real to me.”

Garcia grew up in Virginia and came from a working class background with many of his friends living in trailer parks, while lead actor Neff was cleaning houses for a living when he tried out for the role of Jimmy. These are people who have made it out of the situations they’re depicting. Although Garcia is now presumably wealthy from years as a successful writer and producer, during the 2007/08 writers strike he worked incognito as a janitor at Burger King in Burbank, California just to prove to himself that he could still do “real” work should he ever have to.

As the reality of caring for a baby hits Jimmy, as well as the smell when changing a nappy (“I threw up on the baby”), it’s hard not to empathise and root for him. If you’re looking for a reality show then this is funnier, more endearing and closer to real life than most unscripted TV currently on offer.