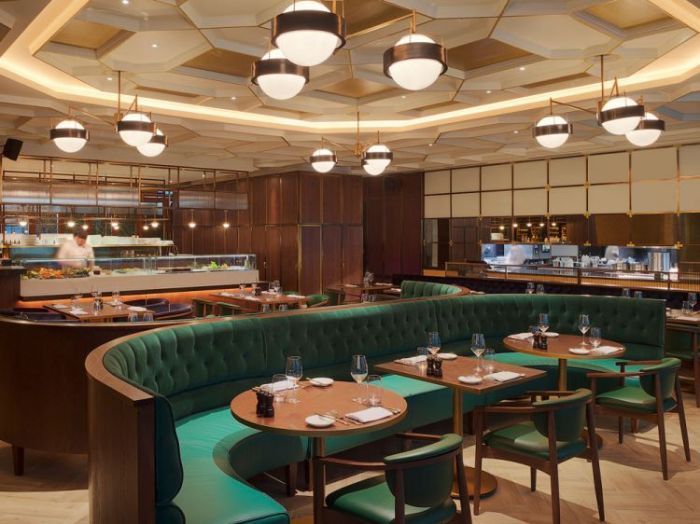 There’s not a week, nor restaurant conversation, that goes by without someone lamenting the passing of Rivington Grill. It closed down on 5 June last year, and for many it meant their go-to restaurant had gone.

We may have found the replacement.

Galvin is somewhere that could be your semi-regular. There are enough good choices on the menu to warrant return visits, the setting is lovely with comfy booths in the dining room and there’s a stylish upstairs bar that has a future-retro 1970s feel.

It all comes from British chefs Chris and Jeff Galvin, who have a growing collection of places in the UK. They have already opened the nearby bakery Demoiselle by Galvin (also in City Walk) which is great, but totally different to the new restaurant in terms of concept and style. At Galvin, it’s British chefs doing French food, without the fussiness that puts some people off French restaurants. And the dishes are winners.

The pumpkin velouté with Comté raviolini and sage oil is one of those things that people will talk about. They should. It’s an autumnal dish that hits the rare intersecting spot on a Venn diagram of “comfort food” and “fancy food”. Likewise, the risotto of wild mushrooms with beurre noisette, Piedmont hazelnut and truffle is a brilliant seasonal dish on a menu that has been created for this time of year. Not everywhere is so conscious about seasonal food.

Mains include beef tenderloin with wild mushroom, bone marrow tart and caramelized shallots, a Middle Eastern inspired tagine of lamb with couscous, aubergine purée, confit lemon and harissa sauce, and a roast pavé of sea bass with cauliflower purée, light curry, raisin and pine nut dressing. All are dishes that you’ve probably eaten in another form, but Galvin gives them a twist so that they’re presented in a new and interesting way without taking away the hearty, comforting familiarity of the main ingredient. It’s a hard trick to pull off but Galvin does it very well.

OK, it’s not cheap, but then nowhere is in Dubai if you want real food. Comparatively though, Galvin is priced fairly. That amazing pumpkin velouté was AED56. The risotto was AED116. The tagine of lamb AED146 and the apple tart cost AED46. You can see the whole menu here.

Its rival restaurants probably include places like La Cantine du Faubourg and La Petite Maison and if you like those you’ll like this, but Galvin also feels homely and is a fine new addition to the area. City Walk has been steadily developing an impressive dining scene over the last 12 months. Virgilio Martinez opened Lima, adding to the Peruvian options in the city, then Toro+Ko opened next door with Barcelona style tapas. The Galvin Brothers had already opened their nearby bakery.

At Galvin, you’ll find yourself in very good hands. In fact, pastry chef Ryan Harris, who oversees Galvin and Demoiselle, has just won a pastry chef of the year award. The Executive Chef of Galvin Restaurants is Luigi Vespero, who spent three years on the opening of Galvin la Chapelle and Galvin Bistrot de Luxe, both in London. Prior to that he worked under Gordon Ramsay and also managed a UK institution – the best place for eggs Benedict in the world – The Wolseley.

There’s talent here and that should count for something. We don’t cherish our culinary treasures here in Dubai, we take them for granted. The fact that you can walk into pretty much any restaurant and get a table on any day of the week is a staggering thing, given the high level of food being served in many of them.

Chef Atul Kochhar of Rang Mahal told us recently that he thinks there are just too many restaurants in the city and that’s fine, but it means we’ll lose a lot of them along the way. We’ve recently lost Morah and La Luz, the latter headed by someone who was previously second in command at elBulli in Spain – the restaurant named best on the planet five times.

La Luz was incredible, and had it been in London or New York there would have been a waiting list to eat there, but people seemingly don’t want incredible on a regular basis. It just became something they tried once, enjoyed it, “experienced” it, but never went back. And Dubai’s population of potential high-end diners is too small for places to survive on single visits, no matter how impressive.

Sure, we all need a restaurant that is our “special occasion” place – somewhere to go for a treat on a birthday or anniversary, but we also want regulars. Although not too regular.We need a go-to place because it’s payday, or because we want a night out, or because friends are in town, or because there’s no conceivable way I’m not having that pumpkin velouté with Comté raviolini and sage oil again.

Galvin could well be Dubai’s next “go-to restaurant”.