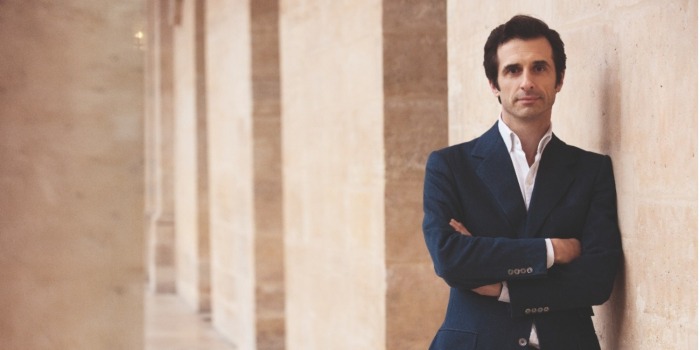 Olivier Polge, one of the top “noses” in the business, and the art of creating fragrances.

There’s a theory that if you want to seduce a woman, then wear the aftershave her father wore when she was young. The thinking is based upon smell being one of the greatest triggers for memory and how the scent of her dad’s aftershave can generate feelings of happy nostalgia, pleasure and comfort.

But before you slap on the Brut or Old Spice and strut through the office playing the numbers game, it’s worth noting that modern aftershaves — now largely referred to as fragrances — blend even more aromas to evoking feelings and emotions than anything created in the 60s or 70s.

One of the world’s leading perfumers — colloquially known as a “nose” — is the Frenchman Olivier Polge and even if you haven’t heard of him, you’ve probably smelt his work. His list of creations is extensive, but recent works include fragrances for Burberry (The Beat), Davidoff (Hot Water), Diesel (Only The Brave), Jil Sander (Jil), Kate Moss (Vintage), Kenzo (Power) and Viktor & Rolf’s Spice Bomb.

His latest work is Valentino Uomo, the new men’s fragrance from Valentino. Polge created Uomo with a traditional pyramidal concept (top, heart, base), where woody notes in the base are particularly highlighted in this edition. It opens with bergamot and myrtle as top notes, then in the heart there’s roasted coffee combined with gianduja cream, on a rich base created of cedar and leather. The key is to blend just the right amount of each (“In a fragrance, there is nothing worse than useless ingredients”) and create a balance.

Polge is originally from the town of Grasse in the South East of France along the French Riveria, just north of Cannes. The population there is little over 50,000 but a fifth of those people are employed in the perfume trade. This small town is the world’s perfumery capital.

His father, Jacques Polge, was the house perfumer at Chanel from 1978. Olivier joined Chanel to take over from his father who retired last year, but Polge the younger has already more than served his time and in 2009 he won the 2009 International Fragrance Prize / Prix International du Parfum for artistic achievements in the field. And it’s not a quick route to get this good. The noses are trained, or have spent time, in Grasse to distinguish over 2,000 kinds of scent. As a point of comparison, a wine sommeliers scent kits, the L’Atelier du Vin, usually have around 80 notes to learn. And In the same way that a sommelier could blind taste wines and identify huge amounts about them, Olivier can do that with ingredients for fragrances.

“We don’t have the same tools as a sommelier, but since I am in the business, I have all the raw materials and I regularly smell them and try to make sure that the quality is right. Theoretically, I’m using access to about a couples of thousand raw materials, but you have a lot of smells that are related, so for example I distinguish whether a particular ingredient comes from Hati or Java. One is slightly smokier, but a normal person would mix up the two. And then you know them, after your sensibility would lead you towards the much smaller range within specific ingredients.”

The thinking behind the new Valentino Uomo fragrance appears to be incredibly specific: “This scent is inspired by a specific scene at the end of an aristocratic family lunch, on a huge table set on the terrace of a Roman Palazzo with notes emanating from the garden, as well as some drinks and desserts still on the table after everyone has left…” The broader picture, however, is that of the comforting aroma of good food and flowers from the garden. Indeed, the notes in Uomo include bergamot, myrtle, roasted coffee, gianduja cream (a sweet Italian chocolate), white leather and cedar.

It’s subtle, but brilliantly hits the right spots for what attracts women without them even knowing it. A British survey of over 4,000 people showed that the smells women like the most are freshly-baked bread followed by clean sheets and freshly mown grass, fresh flowers and vanilla. Nice food, gardens, flowers and freshness — Polge knows what works. The study also found that 92 per cent of women said smells make them happy, with evoking memories of happy childhoods named as the main reason. There’s a real science at work here.

(Conversely, smells that men noted as being particular favourites were petrol, frying bacon and bread — so take note ladies, dab on a touch of Special and make him a bacon butty.)

Even one of the great perfumers has particular favourites that he likes to draw upon, in this case “bergamot, patchouli, and orris root” while expressing a dislike of scents like gardenia. “I think perfumers do have styles and preferences that may come from the past, but it has to be a style that you can adapt to the brand we work for,” he says and he is happy to admit that he doesn’t have a specific end point when working. There’s no “aha, that’s what I had in mind!” moment when creating, but he just knows when it’s right.

The starting point, however, is visual rather than olfactory. “Then the brand comes to me to show me to their intention. In this case, it was very much linked with the description of this Valentino man. I was shown pictures of Italian movies from the ’50s and mood pieces like that, which have a very charismatic man. This is a man’s man. Even though I see everything that is visual and conceptual, it leaves you with large freedom for a smell. It was obvious that with this type of character, for me, it would not be a sporty fragrance, it calls for warmer, but racier ingredients like wood.”

With more fragrances being released all the time, he says that occasionally “accidents can happen” and they can create something that is very similar to a fragrance that already exists, especially the top notes, but the enduring fragrances are distinct. Unlike in fashion, the trends don’t alter every spring and autumn, and fragrances are usually available for years at a time. Acqua di Parma Colonia, for example, has been available since 1916 and still sells today, but there are longer-term trends over five-to-ten years.

“I used to work in the US in the ’90s and I remember at the time we were usually asked for very light, transparent fragrances and it seems today it is the opposite,” he explains, but telling adds, “the good ones will endure.”

So what was Polges first aftershave? “The first one I used was Chanel’s Egoïste, although I didn’t buy it, it was actually my fathers… in fact, he created it.” Fathers and their aftershave — there’s clearly something in it.