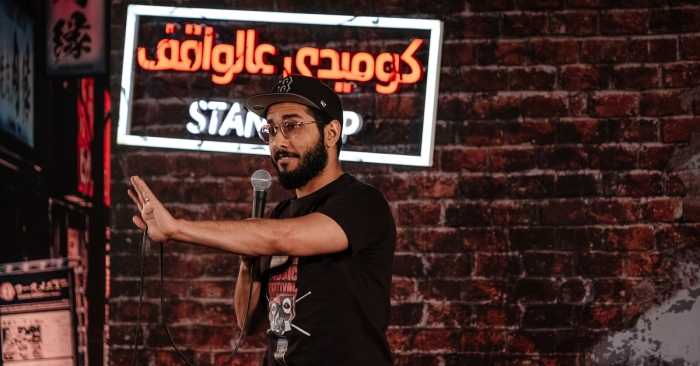 To many outsiders, doing stand-up comedy in Saudi Arabia sounds like a forfeit, or at best, a potentially risky thing to do if you plan to say anything of interest. But the Kingdom is opening up, reforming, and for Saudi stand-up comedians like Fahad Albutairi it’s only going to help the comedy scene there.

“The current changes in Saudi are going to prove a kinder environment for stand-up comedians to thrive and experiment,” he says before pointing out that the changes have been met with almost complete acceptance. “That will directly affect the comedy coming out of Saudi and provide even more of a fertile ground for comedic endeavors by creatives in the region.”

As well as stand-up, Fahad acts, writes and is that most Millennial of things, a YouTube personality, but has been on the scene for some time now and was one of the first stand-ups to appear on stage professionally in Saudi Arabia and in the GCC. He started out performing as a comedian while at University in Texas before bringing the medium back to this region.

Dubbed the “Seinfeld of Saudi Arabia” by The Washington Post, he’s now one of the comedians leading the charge for recognition in this part of the world, and being Saudi has meant he’s there at the forefront of significant changes.

“Up until this year we were probably the only country that didn’t allow women to drive and didn’t have cinemas, and all that changed in what felt like a month, so, coming from a generation that has lived both experiences – the strict past and the current progressive reality – I think it provides a lot of comedy material to draw from.”

It’s even proving to be something of a culture shock for him. “There is a lot of freedom to talk about whatever you want in America, but growing up in Saudi and coming from that cultural background I found really open freedom of speech confusing and uncomfortable,” he explains when asked about how his time performing in American compared to this region.

There has, however, always been a political edge to what he does and he’s not one for the most obvious broad comedy (“broad comedy is like fast food in that it can only last so long before it goes stale”) but rather preferring to work on the edge of what is permissible. “The lines aren’t really clear,” he shrugs, “but it’s all about keeping it smart and keeping it intelligent and usually that goes over the head of people who might get you into trouble.”

And with 75% of the population being under the age of 30, the changes are being embraced and country is opening up and becoming more receptive to new forms of entertainment every year. “To label it liberal or conservative is a little too pre-emptive, but it definitely goes in a line of progression,” he says. “Younger audiences are more accepting of change than older ones and I guess that’s why we’ve seen really, really, fast changes in the past two to three years.”