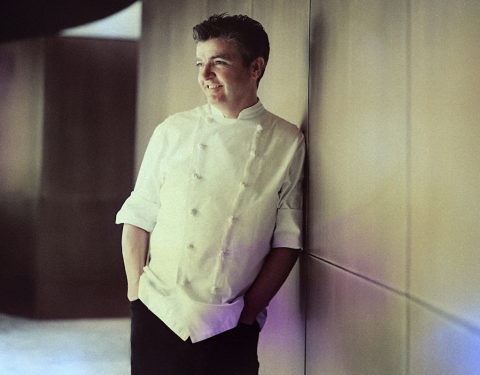 The Opera House was a huge deal for Dubai, because no city needs an opera house. Having one is a sign that you’re somewhere that is so developed and advanced, you can spend time and money creating somewhere for the arts. It’s a sign that a city has culturally arrived, and Dubai’s opera house is one of the most modern and technically excellent anywhere. Now, it has its own restaurant. While that may seem like a secondary thing, it’s a significant one in culinary terms for the city, as is the appointment of the man behind it – Sean Connolly. He’s from Huddersfield in the North of England and despite having lived in Sydney for years – where he made an award-winning career for himself – he’s retained that Yorkshire accent. Which is really rather fitting. It’s a no-nonsense accent that suits his no-nonsense food.

“We wanted to create somewhere where you can pop in twice or three times a month and it’s not going to break the bank. It’s not cheap, but in Dubai… “, he trails off but you know what he means. When it comes to the price of food you can only really compare Dubai with Dubai, partly for your own sanity and partly because there’s nowhere else in the world that’s accurately comparable to Dubai.

“We need to make it a local place and it’s a really important restaurant to me,” he adds. “It’s not like I have 25 restaurants with a load of Michelin Stars, this is a huge deal for me and I make sure I’m involved on a daily basis. I come as often as I can and will fly in here once a month to get to know the business and community to get to know the regulars.”

Even by Dubai standards, it’s a big restaurant that can serve 360 people and it’s twice the size of anything he’s done before. There’s a raw bar, chef ’s table, a terrace, and a lovely big pizza oven.

“Emaar were a bit like, ‘Oh… pizza?’ because it’s such a beautiful restaurant in such an iconic building,” he explains. “But what we’ve tried to do is not make it fine dining, but rather casual done really well.”

He points over at the big pizza oven. “A good pizza should only take 90 seconds to two minutes at 400 degrees – it’s the original fast food, so I thought that would be good for the front area.” And there’s sense in that. Few are going to want a three-hour tasting menu before going to a two-hour opera performance.

“The operatic crowd will be different to those coming to see My Fair Lady, but my menus are populist, you can read everything and it’s never too tricky – you know you’re in good hands. We’ll be serving burgers and fish and chips, and caviar and oysters as well, but all will be quality.”

Sean rose to fame through molecular and avant-garde cuisine in Australia, winning multiple awards, and off the back of that he opened Sean’s Kitchen, a 1,000  square metre bistro-brasserie. “I found that more fun than doing molecular where I’m only cooking for one percent of the nation,” he says.

“You’re only cooking for 60 people a night and each plate has more moves than John Travolta. Now it’s prawn cocktail, but done with the best prawns I can find, and with beautiful fresh salad and our own special sauce. Or a beautiful piece of organic chicken from France and everything is cooked with love and thought. These days that the well-heeled traveller recognises quality and simple food and that was my sales pitch when I explained what I wanted to do here.”

He smiles. “Without wanting to sound like a dick, it’s a brand of quality.” And right there is perhaps the best line to describe Sean and his food. It’s consistent quality that you can rely on, and he’s humble enough to worry about how he sounds pointing this out, despite all his accolades. It’s a really smart appointment by Emaar and another restaurant in the city that will help drag Dubai in line with what’s happening elsewhere in the world.

From gastropubs in London to noodle bars in New York and brasseries in Sydney the way we eat is shifting. Now Dubai is starting to catch up with places like this as our food scene continues to evolve.