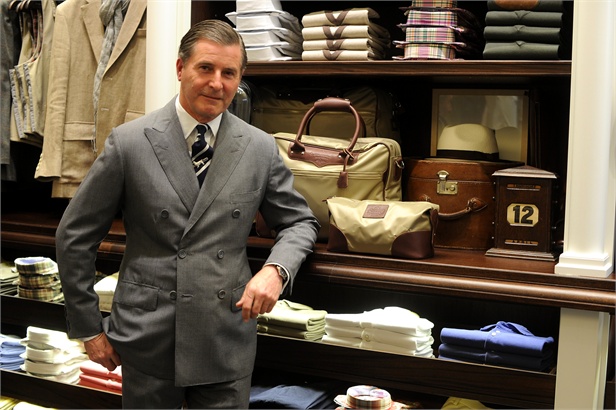 “I struggle with pocket squares because I am conscious it looks as though I’ve made too much effort,” Jeremy Hackett says. Right there, in that one line, is all you need to know about Mr Hackett and his brand. It’s the most English of sentences. And in many ways it’s the reason the brand has been a huge success with men, regular men who want to look good but don’t want to look like they’re “trying too hard” or, as Michael Caine said in Alfie, “too poncified”.

That “dandy” look that was seemingly everywhere for the last few seasons is falling out of fashion now. Once again, we’re returning to a more relaxed look. “I prefer to keep it simple”, Hackett tells Esquire from the front seat of the car as we drive down King’s Road in Chelsea, London, and past where he started out. “This is where I used to have my shops,” he says, excitedly breaking off from a sentence and pointing at an upcoming crossroads. “One shop on that corner, then one the other side of the road — the cab drivers used to refer to this spot as Hackett’s Cross. And that pub over there, The White Horse, that was our local — it was known as the Sloany Pony,” he chuckles and then lets us in on a secret: he was responsible for that red trousers trend that was so cherished by certain types and derided by pretty much everyone else. “We used to sell red trousers and lots of the Sloane types used to come in and buy them, and it just spread from there,” he says, before hastily adding, “I’d never wear them though.”

Red trousers aside, the Hackett brand has established itself as one of the key international torchbearers of a British style that is largely cherished around the world. “Everywhere I go, people are talking about it” he says. “There’s a real appetite for the look and we always have this British ambiance about the brand. But abroad it’s appreciated more than in England. The French are Anglophiles, much as they’d like to deny it. In Spain, they have those department stores called El Corte Inglés [The English Cut] and the Italians love the whole idea of the English gentleman. As for the Americans, you’ve only got to say Downton Abbey to them, and in Scandinavia they are absolutely mad about Midsomer Murders. There’s this romantic notion of the English gentleman and everything that surrounds it. So the market, for us, is certainly worth playing up to.”

While they certainly do play up to the notion of Britishness, the downside, is that while that look and style is desirable, the British manufacturing industry in 2014 is struggling. “It’s tough,” he sighs. “I said in an interview with The Times newspaper that there was very little manufacturing left in Britain and I was castigated for it. But to be honest, there is very little and although it’s coming back, that’s more at an artisan level rather than serious manufacturing.”

The Times did concede that between 2000 and 2009, production of textiles slumped by nearly 45 percent as British fashion houses increasingly outsourced their production operations. “Some people ask why don’t I get involved in manufacturing, but I’m a retailer and that’s what I’m good at,” says Hackett of this slump. “Back when I started, 95 percent of everything I sold was made in England but now there’s competition from Italy, Portugal, Germany, Turkey and so on. I have one manufacturer I use in England who is really good, but I had to sell the suits he made for £1,500 [Dhs8,980] and I mostly need to be selling a suit for £600 [Dhs3,600] to £800 [Dhs4,800]. Once you get to £1,500, it’s a different customer.”

So, despite the obvious love for British style, are people not prepared to pay a little extra to know that it not only looks British but was made there too and it’s truly authentic? “People like the idea of ‘Made in Britain’ but it’s a tough call,” he says. “I think there’s a point where people will question if it’s worth the extra money. Say, for instance, you have to choose between two shirts: one is made in Italy and costs £90 [Dhs540] and the other is English and is £120 [Dhs720]… it’s going to be a tough sell.”

Much like his UK compatriot, Paul Smith, Hackett is a man who worked his way up through the trade from the shopfloor rather than via air kisses and the catwalk. He’s earned his right to be here and is a businessman as much as a figurehead of the brand – that much is clear when he talks about margins and outsourcing. But at heart he’s still hugely passionate about clothing. As with many of the elder statesmen of British style, this can be traced back to having been a member of that most tastefully forward-thinking of tribes, the Mods. “Oh sure, I was a Mod when I was 16,” he grins. “It was towards the end of that era, and I liked the style because it was neat and tailored. That look is still something I warm to. The late-Mod, early-Skinhead thing, what I’d term a Suedehead, that’s a good image. It was that slightly French influence: the neat trousers, short sweater, button-down shirt, probably Ben Sherman, which I used to sell by the truckload when I was 16. Young guys of 16 or 17 would come in on a Friday to the shop I was working in with their pay, in cash of course, all wanting a new Ben Sherman.”

It’s in this reverie that Hackett perhaps reveals where his sartorial heart lies. Was this the key era when British style was at its peak?

“Overall, the British style was probably best in the 1950s and 1960s when things were a less global and identities were less diluted,” he says, before explaining how fashion is now “a bit mid-Atlantic” thanks to people having the opportunity to travel more and see different cultures, which influences the way they put clothes together. “Americans always look to the more classical end of British fashion, but it’s done in a softer way than it was done in England. And again because of travelling we’ve become more American, so it’s a marrying of the two looks.” He doesn’t claim to be immune to this trend. “Hey, I love a lot of the American stuff — I’m wearing a pair of 25-year old Brooks Brothers cordovan loafers as we speak,” he says.

A look back at the Hackett archives testifies to this gradual change in style. “When I look back at old photographs of what we were doing 30 years ago, the shift looks quite dramatic, but it has simply evolved across three decades and the tailoring has become much softer and lighter from what we use to do, so it’s generally more relaxed now.”

Softer, lighter, ever-evolving… it’s a positive change, though still there’s a fine line between getting the Brit look wrong and looking like an office drone on the daily commute, or pulling it off to look like one of the cast of The Avengers. The Hackett range does it nicely — indeed, the bowler hat and crossed umbrellas of the Mayfair range is inspired by John Steed of the iconic ’60s spy series. That Mayfair range is a gentle side door from the high street of seasonal fashion; one that leads to a more timeless look that you won’t have to spend a fortune on. As a further bonus, you won’t look like yesterday’s man before you’ve paid off the credit card bill.

The basic rules, however, are still pretty clear. “The biggest mistake men make,” he says, “is either that they’re not making enough effort or they’re making too much effort. For me it’s about owning your clothes. Dressed but not dressed up. Simplicity is the key and making sure that things fit well when you buy.

“There’s this whole dandified thing and I keep seeing these street photographs with everyone trying to get in front of the camera with this dandified look and… gawd, it’s horrible. Just make sure that things fit well when you buy them and wear them properly.” He leans in, slightly conspiratorially. “I see people wearing jackets where the sleeves are far too long and they’re wearing them with all three buttons done up.” He laughs and shakes his head, still the 16-year-old Mod at heart, somewhat exasperated by the others getting it wrong.

The British manufacturing industry may be a fraction of what it was, but in terms of style and design it’s as popular as ever. Jeremy Hackett is one of those men who give it every reason to be optimistic, and if you’re ever unsure when shopping, he’s a reliable sartorial compass. Just keep it simple. Make sure it fits. Dress for yourself not others and, for goodness’ sake don’t do up all three buttons on your suit jacket.

Our car pulls into Putney, down by the Thames river, through the wandering crowds (including several pairs of red trousers) and up to The London Rowing Club boathouse, sponsored by Hackett for today’s 160th Oxford-versus-Cambridge boat race. It’s an event as British as they come, sponsored by a brand that celebrates this exact spirit. As we get out, he smiles, looks up at a leaden sky and cheerily says, “Y’know, I think the rain’s going to hold off… we’ll be fine.”