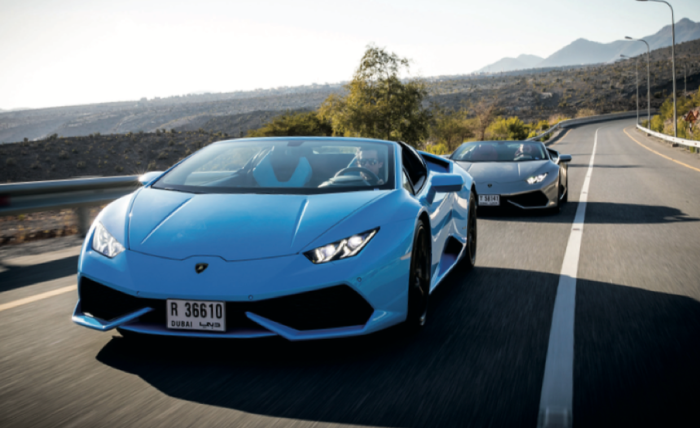 Over the last decade or so there appears to have been a homogenization of cars, but one car maker has remained utterly distinctive – a Lamborghini will always look like a Lamborghini.

It’s not a brand of curves. The sharp angular, supermodel lines are part of the Lamborghini DNA and in a region where supercars are not uncommon, you always know that it’s a Lamborghini when briefly see it in your rear view mirror, just before it flies past you.

For the Lamborghini Huracan – created to replace the Gallardo – it’s a stunning carbon-fibre collection of angles, both inside and out, but the big difference is that now it’s a car you can drive without feeling like it’s something you should only be using at the Bonneville Salt flats.

The Lamborghinis of the 1970s and 80s were big knickerbocker glory sports cars, wild, extravagant and impractical, full of e-numbers, one big costly sugar rush with no nutritional value that all bar the most devoted would admit is a challenge as much as a pleasure. The famous Countache that was in production from 1974 to 1990 and adorned young boys’ bedroom walls in poster form was a visual delight but a wild beast to drive. You couldn’t see behind you, the back was significantly larger than the front and driving it was often like riding a bull. In the beloved Muira, driving forward you looked like a superstar, but you had to open the door to see where you were going while reversing. The Huracan, however, is something totally different.

For a start it’s easy to drive and a car you can live with throughout the week, and you can thank the Germans for that. In the past, the Italians didn’t bother to do practical with their supercars, but under the German ownership this modern supercar is not just something you save for the open roads and long drives of the weekends.

On the Rake’s drive it dealt with the endless short bursts between the traffic lights and roundabouts of Al Ain with as little fuss as a Golf GTI, while older cars from Lamborghini may have thrown a hissy fit, this one revels in the town as much as the country.

It’s a compliant ride in Strada mode, and has tauter body control in Sport and Corsa modes all of which are changed from a switch at the base of the steering wheel. There’s no manual option and no central screen, instead all functions are dealt with via a display behind the steering wheel, including controls for the blinkers, wipers and high-beam lights – many of the interior parts are made by Audi so you know they’re of good quality. It’s more like a fighter jet’s cockpit than a car, but it’s comfortable, even on long drives and despite being 6ft 2ins it didn’t feel like I was wedged in there.

That said, neither do you feel like you’re sat in an armchair – after all, this is a sports car and down the long, winding “Snake Road” from the top of Jebel Akdar in Oman it revels in its ability to hug the road around tight corners at speed. No hint of swaying, its rear end stays in place the whole way and overtaking in the Huracan is a joy rarely experienced in cars. Pull out, burst of acceleration, pull in, it’s like being on a giant Scalextric track – rigid and in control with no hint of a roll, sway or wobble.

And remember the guy – it’s always a guy – who sees you overtaking on a short stretch so accelerates himself to try and prevent you doing so? Good luck stopping me overtaking you in a Huracan, you just bought a knife to a gun fight my friend.

Then, on the open roads of Oman, heading up to the UAE border the car comes into its own and almost begs you to open it up between speed cameras. On the very brief journey accelerating from naught to naughty, there’s that thrilling sensation of being forced back into the seat, a real “God speed John Glen” moment as the magnificent 5.0-litre naturally aspirated V10 petrol engine with 449kW of power launches you forward.

It will reach 100 km/h in 3.4 seconds and do 0 to 200 km/h in 10.2 seconds, but it does it all quite wonderfully. You hit 120km/h and it feels like a meandering, gentle stroll as you fly past roadside goats, ruffling their fur.

It races up through the new seven speed dual-clutch gearbox and at 150kmh you’re cruising with a smoothness that you’d only expect to find in something like a Bentley. But the speed and power keeps coming. As the digital readout shows your speed hitting 250km/h the car still feels totally planted, stable and there are more horses there if you need them, but that short journey there is exhilarating.

When it accelerates the noise makes you laugh with joy. This Italian automotive operetta raising its voice through the revs and gears as you hurtle forward and crucially, it sounds like a Lamborghini. That growling burble as the revs tick over is one of the automotive industry’s great noises then the as you drop your foot it rewards you with an unapologetic thrill ride, making a noise like elephant trumpeting into a megaphone, a glorious clarion hurrah that screams fun, speed and the unabashed joy of just driving.

It’s a raised middle finger to austerity, to sense and sensibility and the gentler, toned down designs of automobiles. It’s what a supercar should be and the world needs cars like this, spreading joy simply by existing. For those who find themselves financially disposed to be able to afford one, then it’s exactly the sort of luxury purchase that’s going to give you a thrilling return for your money in a way that an extension on your house or a piece of art never will. In fact, this is almost a piece of art that you can drive.

Available in two body styles – Coupé and Spyder and also with a choice of rear or all-wheels drive – producing 562bhp for the RWD and 593bhp for the AWD version and despite all the power and speed it still feels safe and controlled.

On a straight bit of road, The Rake pulls alongside an SUV where a small boy has pressed his nose up against the glass, staring in wide-eyed amazement and smiling with joy at sight of a silver Lamborghini. A smile returned, a quick wave then drop a gear to bring up the revs, weight on the accelerator and in a roar we’re gone leaving behind a small boy, still grinning, day totally made.

In 2017 Lamborghini is still bringing utter joy to small boys, and it still makes grown men feel the way about cars that they haven’t done since they were small boys themselves. It’s what a sports car should do, and if you discover your bank account has a large surplus then a Lamborghini is a fine and fun way to announce that to the world. And with the new Huracan, it’s now something you can use every day.

For The Rake magazine.