The latest Superman reboot will once again re-tell the origins of the Man of Steel, just as the 1978 Richard Donner film did and the Smallville TV series did, and the comics did and so on. As a story, it’s nothing new. Superman’s backstory was first described in 1938, in Action Comics No.1, and not only did it give the world Superman, it gave the world the idea of a superhero and what would become the most valuable comic book in existence.

Although it only cost ten cents upon release, it’s now worth upwards of one million U.S. dollars, depending on the condition. And with fewer than a hundred known copies still in existence from the original 200,000 print run, it’s hugely sought after. The story of how one copy went missing has become comic-book legend and an adaptation of its disappearance is now in production to be made into a film.

It was owned by the actor and comic book collector, Nicolas Cage. His copy of Action Comics No.1 was framed and mounted on the wall of his West Los Angeles home, along with other rare books from his extensive collection. Then one day in 2000 Cage noticed that it, along with two others, had gone. 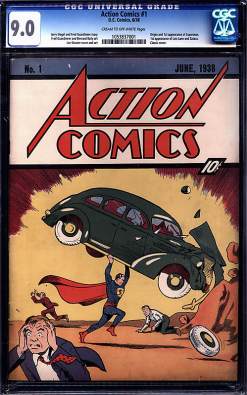 “Three of my best comics were robbed — Action One, Detective 27 and Detective 14,” he ruefully announced. Detective Comics No.27 marks the first appearance of Batman and is the second-most valuable comic in existence, with good quality copies in the current market having reached one million dollars. But due to its rare fine condition it was his “Action One” that was the jewel. The first thing Cage did — rather than call the police — was call the man who sold it to him: New York comic book expert Stephen Fishler, at Metropolis Collectibles.

According to Fishler, these books had been placed in high-security frames on a wall. Those frames were now empty. However, it was nearly impossible to pinpoint exactly when the potential theft occurred. Cage had a party at his house the week before. It could have happened then. It is also possible that it had could have happened prior to the party. There was no way to know for sure.

It was first suspected that a bodyguard or someone from his staff was involved, but after questioning, none were charged. Fishler, one of the most connected and respected people in the comic collecting world, then started his own investigation. “I spent considerable time quietly contacting comic book stores in L.A. in the hope that the books would be sold for some quick cash. Several days after the initial report of the theft, a store owner in the L.A. area informed me that he had recently received a phone call requesting pricing information for Action No.1 and Detective No.27. I was very hopeful that this tip would lead to a potential recovery of the stolen books, but unfortunately the store owner received no further phone calls. However, I was not discouraged in that I knew that the books were out there — somewhere.”

A few months later, Fishler was on eBay and got a break. “I spotted an auction for the D copy of Marvel Mystery No.71 — it was the same Marvel No.71 that I had sold to Cage two years earlier.”

The “D” copy refers to what is known as the D collection. In 1991 someone discovered many boxes of comics in Nyak, New York and would bring Fishler a box every couple of weeks to sell. There were almost 1,000 comics in the entire collection, many of them valuable, and the vast majority of them had a small “D” on the top margin of the first page. It was assumed to be the initial of the child who originally owned them and it made this Marvel No.71 distinctive.

“I contacted Nic about the book but unfortunately he was out of the country at the time,” Fishler said. “I emailed the eBay seller with questions regarding the book but received no response.” It turned out that a friend of Fishler’s had won the auction and the deal had been done in person and was completed in cash so he knew the name and address of the seller.

He left a phone message but heard nothing. Cage’s Marvel Mystery No.71, however, was missing.

“With the Action No.1 and Detective No.27 in the spotlight, the fact that Marvel No.71 was missing had just been overlooked, although why someone would also take the No.71 [which, comparatively, is not that valuable] is anybody’s guess.”

Fishler says he passed the information on to Cage’s people and assumed they would take it from there. “For some reason, they did not want to get the police involved. They contacted the seller of the Marvel No.71, a person living in Connecticut, and received a legal letter claiming harassment in return. Because they could not connect the person in Connecticut to a person who had access to Nic’s house, they just seemed to let the matter drop. It was infuriating for me to watch all this transpire, but at the end of the day it was not my book.”

Fishler believed that the person who sold the Marvel No.71 had information about the Action Comics No.1 and Detective Comics No.27. “If I had any doubt about this, that doubt ended when I found out the following: the seller of the Marvel No.71, the same person who submitted the book to CGC [Certified Guaranty Company] to be graded, the same person whom I had contacted with “questions”, apparently frantically contacted CGC, asking questions about their confidentiality policies, fearful that they would release his name to ‘outside parties’ and this occurred shortly after I had left my first message with the Connecticut eBay seller.”

The trail went cold. Then in 2002 Cage sold off most of his collection (around 400 vintage comics) for $1.6 million. Some said that the theft had killed his passion for collecting and indeed, according to Fishler, it was something that Cage had never gotten over.

Others point (more prosaically) to his trouble at the time with the IRS, while some note that he married Lisa Marie Presley just days after announcing that he was selling his comic books and joked that she had made him do it. But although that collection has some rare books — including a Detective Comics No.38 worth $120,000 due to the first appearance of Robin — it was small fry next to the three that had been stolen.

As time passed, it was increasingly assumed that the theft had been orchestrated by a rival collector who wanted the three books for himself — or at least the two of high value. Like rare and famous art, they would be hard to sell on the open market and the fact that they hadn’t surfaced led credence to this.

Then, in April 2011 the Action Comic No.1 bizarrely appeared. A Californian entrepreneur bought some storage units and found the copy of Action Comics No.1 in the contents. The man refused to be identified and is known only as “Sylvester”. He seemed to know what he had found was valuable and Fishler was flown in from New York to identify the book as the same one he had sold to Cage.

Incredibly, despite being missing for a decade and found in a storage locker, its condition had not deteriorated. The Los Angeles Police Art Theft Detail investigated but details were never released, let alone the name of the man who found it.

Via his publicist, Cage released a statement calling the find “divine providence” and expressed hope “that the heirloom will be returned to my family.” Although he had already received an insurance payout, there was reportedly a discussion over reaching a settlement to regain ownership of the book.

It was then sent to the CGC to be graded and they concluded that it was a 9.0 out of 10.0 — the best that has ever been graded for this book. In December 2011 it reached a price of $2.16 million at auction — the first time a comic book has sold for more than $2 million. Cage had paid just $150,000 for it fourteen years earlier and he was thought to be the seller, though neither party’s identity was revealed and the present owner has remained anonymous. Fishler said at the time, “Not in my wildest imagination could I have predicted that this legendary Action Comics No.1 would be found, graded at 9.0 and break the record.”

Now, it’s to get the big-screen treatment. Lionsgate films has picked up Action No.1, describing the script (from the writers of Reno 911!) as a heist comedy about a group of nerds who attempt to steal Cage’s prized comic. It’s hoped that Cage will appear in the film, and it would be worth the ticket price alone just to see a classic on-screen Cage meltdown in the scene where he discovers his books are gone. The missing Detective Comics No.27 has never been found.

But wait, there is another…

Cage’s Action Comics No.1 may not be the finest copy, as another exists, but has only been seen by a few people. Known as the Edgar Church copy, it’s part of the huge collection that had been amassed by Edgar Church — an engineer from San Diego who collected comics from 1937 to 1955. He stored them in his basement in Denver, and because Denver is at such a high-altitude his basement was cool, dry and perfect for storing the books. In 1977 — a year before the 88-year-old Church died — the collection was bought by Mile High Comics owner, Chuck Rozanski. Some say he paid as little as $1,800 and knew that he was getting them all ridiculously cheap.

The set consisted of around 16,000 comic books dating from 1937 to 1955 (the Golden Age of comics) and included an Action Comics No.1. Over time, Rozanski sold off the collection bit by bit, including that first appearance of Superman, to various collectors. But very few ever saw that fabled near-mint condition of Action Comics No.1 up close, and high-res images have never been released. The current owner, known only as “The Dentist”, was thought to have wildly overpaid in 1984, when he spent $25,000 to acquire it, but there are only really two other things we know about that copy:

But few people even know who “The Dentist” is or where he’s from. And after what happened to poor Nic Cage, his anonymity — like many comic-book superheroes themselves — is somewhat prudent.