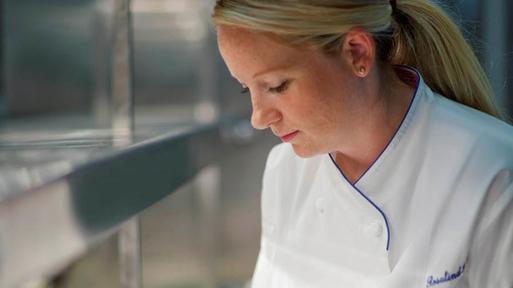 Despite the fact that, statistically speaking, most of the cooking in homes is still done by women, there has always been a curious lack of female head chefs in restaurants. Why is this and are there any signs of it changing?

A Bloomberg survey of 160 head-chef positions at 15 well-known restaurant groups across the United States in 2014 revealed only 6.3 per cent were held by women. In addition, of the 172 Michelin-starred restaurants in the world, only 10 – 5.8 per cent – have female head chefs, and fewer than one in five chefs at any level in the United Kingdom are female.

Women head chefs in the UAE are also rare. Rosalind Parsk, the ­executive chef at Courtyard by Marriott Dubai Green Community, says in her experience the one-in-five figure is about right.

“Mainly you will find female chefs in pastry, with just a few in hot kitchens,” she adds.

So why do so few women make it to upper positions in ­professional kitchens? The answer seems to be the same the world over.

“Being a chef isn’t the most glamorous of jobs,” Parsk says. “You work very long hours, you are always on your feet and it requires a lot of passion for food – it’s just not a job for everyone.”

She doesn’t believe it is ­necessarily harder for a woman to be a chef – at least not until you get older.

“When you’re younger, you’re full speed ahead and full of ­energy, and as long as you can handle working long hours and want to learn, it doesn’t matter what sex you are – it’s when you get older things get harder,” she says. “I don’t have children yet, but I think this is when it becomes hard – balancing home life and work life.”

Time and again, the issue of family comes up when asking questions of top female chefs. Prue Leith, the best-­selling cookery writer who was at the recent Emirates Literature Festival in Dubai, offers her opinion.

“Women cannot be top chefs, mostly,” she says. “You look at the top women chefs, and they are unmarried and don’t have children.

“The reason is chaps will not stay at home and look after the children while women work. You don’t get to be a Michelin-starred chef by ­cooking lunch.”

Although there are top female chefs who have children, the long, family-unfriendly hours undoubtedly have an effect. That being said, there are signs more women are making it work.

Liz Nuñez was recently ­appointed chef at Grand Hyatt Dubai’s steakhouse, ­Manhattan Grill. She agrees her ­gender is vastly underrepresented in restaurant kitchens, and also points to the long hours, tough environments and a lack of stability as factors.

“Most people say that the position of head chef is a tough, male-dominated job and yes, this image has been correct – but we are starting to notice a change,” the Argentine says.

“There have been women who have managed to grow as head chefs and prove themselves among the best chefs in the world, and show that a woman in the kitchen can really do just as amazing a job as a man.”

Nuñez lists numerous examples, including Dominique Crenn of two Michelin-starred Atelier Crenn in San Francisco; Anne-Sophie Pic of three-starred Maison Pic in south-east France; Ana Roš, a Slovenian who is considered one of the world’s best; and Clare Smyth, who became the first British woman to hold three Michelin stars, during her reign as chef patron at ­Restaurant Gordon Ramsay.

There has been a notable change at the top in recent years, and despite women still being outnumbered, those who do make it are more visible and could well be inspiring other women to work their way up in the profession.

“It’s a male-dominated ­industry but lately, we have seen more women coming in,” says Sunjeh Raja, the director and chief executive of the International Centre for Culinary Arts in the UAE.

“For the professional industry courses we run, which are a lot more demanding, in an average year between 30 and 40 per cent of the students are women, but for the amateur courses it’s about 80 per cent female.”

Recalling her time at college in London, Parsk says: “We had quite a good number of females, but I think there are only one or two of us that are still in the ­industry today.”

Nuñez also believes female chefs have to sacrifice more than men to make it. “The passion needs to be real,” she says. “In the majority of the kitchens I have worked in, I used to be the only female chef – but I have a tough personality which made things easier.”

“You do have to prove yourself – you need to show that you mean business,” Parsk agrees. “I worked with one chef that quite enjoyed giving me the horrible jobs in my first week.

“When he saw I could handle it … I sort of earned his respect and he started to teach me.” Regardless of gender, the ­women who have made it are quick to point out that leading a kitchen is a more than just a way of earning a living.

“Someone once told me, our industry isn’t a job, it’s a lifestyle choice, and I agree,” Parsk says. “You have to really love it … but it really doesn’t matter what restaurant you work in, or what sex you are – as long as you can cook to the standard required, that is important.”

For The National newspaper