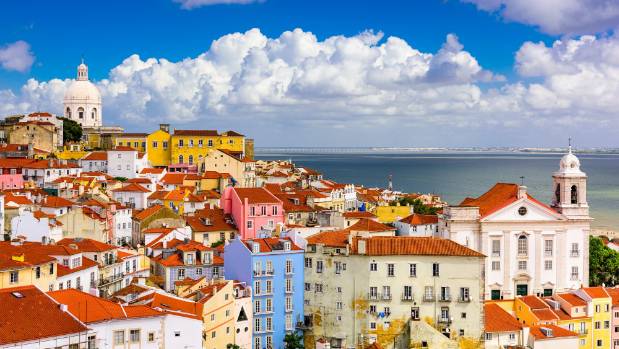 Europe’s most westerly capital city often gets overshadowed by Madrid and Barcelona, the twin giants of its Spanish neighbour, but Lisbon is one of the best short-break cities in the continent. Cheaper, less crowded and with a food scene that is fast becoming home of some of the best value for money dining anywhere, the old port city is vastly underrated and frequently surprising.

While there’s more than enough in the city limits to keep you occupied, it’s also worth taking a drive along the coast to some of the smaller towns. Guincho, for example, is a 30-minute drive and lunch at Furnas do Guincho is a splendid way to pass a few hours. Dine on fresh fish pulled out of the ocean that your restaurant overlooks and snack on some of the best olives, breads and petiscos (small-plate dishes) we’ve ever tried.

The current Portuguese champions are well worth going to see if you can time your visit to coincide with a fixture they’re playing at home. While the new stadium may not have the vast capacity of the original, it’s still one of the best in Europe and with Benfica hosting Champions League football again next season it’s a fine place to watch top-class matches. If there isn’t a game, the stadium and museum tour is still worth doing.

For the best views out over the city, head up the steep but beautiful winding lanes of old Lisbon to the Sao Jorge castle. There has been some type of settlement here since the 6th century BC with Celts, Visigoths, the Moorish and others groups all occupying it at one time. It’s where King Manuel I welcomed back explorer Vasco da Gama and the recent discovery of a Muslim settlement unearthed more history.

The old quarter of the city is home to the iconic Café Brasileira which has been serving artists and intellectuals for over a century. It’s also good for Portuguese vintage shops such as Vida Portuguesa where you can pick up vintage ephemera and edible goods, including the city’s famous canned sardines and pâtés.

Lunch | Tágide
Set in a restored 17th century building, this has been one of the best places to eat in Lisbon for decades. With views out over the city (see main picture, left) make sure you get a seat on the terrace, or by a window. There’s a wine and tapas bar downstairs if you prefer something lighter.

Dinner | O Talho
The front of the building is a top-class butchers while the back room is a meat-heavy restaurant from Kiko Martins — one of the most renowned young chefs in the country. The deconstructed burger (pictured) is one of a menu full of modern updates to traditional favourites. They also have a great wine list and cocktail menu.

Snack | Pastel de nata
You’ll see these little yellow pastries all over the city, but the place to try them is the Fábrica de Pastéis de Belém in Santa Maria de Belém. Originally created by monks at the Jerónimos Monastery these egg tart pastries are created around the clock at The Fábrica and queues often form outside the door. Get there early and get a box of them, topped with a little icing sugar or cinnamon and eat with a strong coffee. They really are one of the best little snacks you’ll ever try.

It’s often the case with European hotels that they look a little shabby amid their ageing charm, especially compared to the newness of Dubai. But the Corinthia would stand tall alongside any of the UAE offerings. Bright, modern and with top-class facilities, it’s a good base for exploring the city and surrounding area. The metro and train station is one minute walk, while the 3,000 square-metre terrace garden is great for al fresco lunches. The hotel spa is the third-biggest, and one of the best equipped, in the whole of Europe, while in-hotel dining options include excellent local dishes for those wanting high-end Portuguese food.

You can get direct flights to Lisbon with Emirates Airlines, which operates a daily schedule.