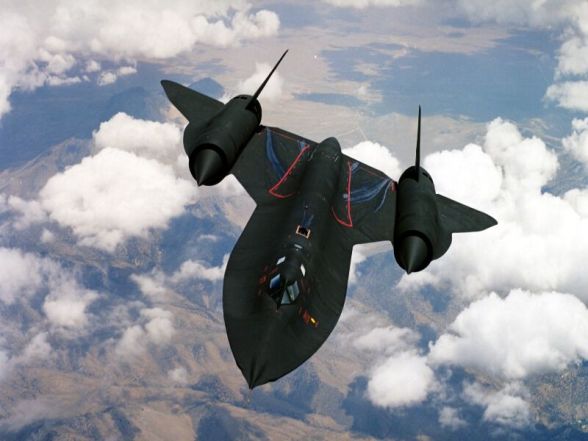 On July 28, 1976, flying out of Beale Air Force Base in California, a two-man crew comprising Capt. Eldon W. Joersz and Maj. George T. Morgan took off in a Lockheed SR-71 “Blackbird”. On this flight, they reached speeds of 2,194 mph (3,529.56 km/h) which to this day is still an airspeed record. But around this time, US Congress was already looking to kill off the plane amid budget concerns.

The SR-71’s maiden flight was in 1964 (this year marks the 50th anniversary) and considering it’s based on engine technology from the 1950s, and designed by men with slide rules and pencils, it’s a staggering piece of aviation engineering. But as with many great things, it was bureaucracy that killed it.

Funding for the SR-71 came out of US Air Force’s budget, but it was mostly used by the CIA. It never really had full support in the Air Force and the cost of running the SR fleet was huge. By the 1980s it cost Dhs955 million annually. The Air Force soon saw the SR-71 as a bargaining chip which could be sacrificed to ensure the survival of other priorities.

Technically it was brilliant. It flew at an extreme velocity of Mach 3.5 at near-space altitude and was near-invisible to radar. It flew so high and fast that it could neither be intercepted nor shot down. If missiles were ever fired at the SR-71 it simply accelerated and watched them get smaller in the rear-view mirror. But it was not flawless.

Imagery and radar data captured could not be accessed until the plane had landed as there was no live link with the ground. In the era of increased satellite coverage this made the SR-71 appear outmoded. And satellites never have to invade foreign airspace. A datalink for the SR-71 was flight tested in 1980 but reportedly the USAF ordered that the system not be installed in what’s tantamount to petty interdepartmental fighting.

Then, during Operation Desert Storm, General Norman Schwarzkopf was dismayed to discover that the reconnaissance an SR-71 could have provided was now unavailable. Satellites may be able to provide images in near-real time but the problem was a satellite’s orbit is fixed and people can work out when it’s coming. And if the area you need to see is not under the satellite at the time you need it, then tough. Not ideal when you’re hunting mobile Scud missile sites. SR-71s could be deployed within hours to anywhere.

As a result the US Congress re-examined the SR-71 and beginning in 1993 three planes were briefly returned to service, now with live image relay systems. The plane was permanently retired from active service in 1998.

In November of last year Lockheed Martin told Aviation Week that it may have a scaled demonstrator of the (tentatively-named) SR-72 flying by 2023. Smaller, “optionally piloted” and capable of flying twice as fast, the SR-72 could enter service by 2030.

Many aviation experts, however, have suggested that the replacement is already in existence, if not in service. There is the semi-mythical Aurora project, for example. And certainly there have been documented billions spent on prototypes that have never officially been released.

After all, you don’t really think all those unexplained sonic booms and unidentified flying objects over Area-51 in southern Nevada are actually aliens, do you?