Giles English, co-founder of Bremont watches on how to stand out in a crowded market. 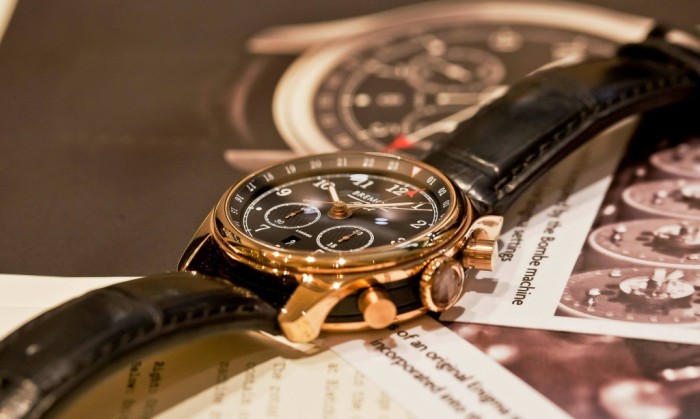 How did the new Codebreaker watch come about?
Every one or two years we come up with a special limited edition watch. About six years ago we created a watch called the EP120, made with parts from the famous World War ll Spitfire airplane. This watch now sells for about three times its original price and has become a real collector’s piece. It all started from there, as we realised that there is a real demand if you make these things in very limited edition and there is an amazing story behind it. A big step up was when we did the Victory watch, made with parts of the HMS Victory gun ship and the original oak and copper that was on the ship at the Battle of Trafalgar in 1805. We worked with the Royal Museum, who were brilliant, and raised a lot of money for them and built up their profile. We created this lovely watch; they gave us access to Nelson’s seal and to the wood and copper, so it was a brilliant thing to do. We’re an English brand, Bletchley Park isn’t far away from where I live and no one knew about it until at least 20 million lives were saved during World War ll when the mathematician Alan Turing and 9,000 of the brightest people in England invented the computer just to crack the code of Germany’s signal traffic. If you go there to Hut Six where Alan Turing broke the code, it is this falling down wooden shed and we knew that we could work with them and help build their profile and raise money for them. In return they have given us original wood from Hut Six which they are restoring. We got original rotors from the Enigma machine and five from the two dozen remaining original punch cards. As we grow as a business we aren’t making more of these limited edition watches, so they become a collector’s item straight away.

This kind of thing has become a theme recently, as we have seen with the Codebreaker and Roman Jerome’s Moondust. Are things like this just to add value in an increasingly competitive market?
Historically, I think people have always done quirky things like this; it is not as though we were the first. You will probably see more people attempt to do it, but the thing is that it is very easy to do it badly, so the story will be lost and it won’t mean anything. I must get ten approaches a week of people wanting to do stuff and from the outside they all seem like a good idea but it has to really be right. A big turning point for us was when we created this watch called the Martin-Baker watch. Martin-Baker is a company that makes ejection seats and it is a beautiful watch which went through two years of ejection testing. We built this rubberised ring vibration mount and Faraday cage to protect against magnets. The US navy saw it and asked if they could collaborate with us to develop a watch for their pilots. It was a snowball from there as a big part of our business is supplying to military squadrons. They approached us for a job which was great for us because they gave us complete creativity. If we like it then we can re-release a similar and commercial version which we will be releasing now. In America we don’t do any advertising even though it is our largest market. It is all word of mouth because of the military pilots who are wearing our watches. We are honoured to be supplying these guys and it is providing a wonderful source of creativity for us. So it is all marketing, but we have realised in our business that marketing sells lots of watches and it also gets the stories out.

As more everyday things become computerised, is the anachronistic nature of mechanical watches part of the appeal?
The fact that you are walking around wearing something that ticks 86,400 seconds a day on your wrist and will last forever after you buy it. It will slowly go up in value every year because the cost of building these things is only going one way since it is complicated. So it is wonderful but you just need huge amounts of patience.

Do your watches go up in value? Certain brands retain their value better than others.
With a standard watch, you walk out of the shop and you lose your VAT and a bit of margin. Then it drifts along and then it goes up assuming that it is not a mass manufactured brand. If you have one of our watches the price will go up in two or three years. So to buy that watch again is considered to be higher and hence it pulls up the secondhand value. I would buy a watch because you like it, not because you are going to save but mechanical watches over time will go up in value.

How many watches do you make altogether in a year?
We will probably make about six-thousand watches this year, whereas some bigger brands will make about 1.5million watches.

And what percentage of those six-thousand do you have to sell in order to break even? Do you have a specific figure?
Not really, because what happens is the more you are making the more you are re investing. It is not an easy business to make money out of, but if you can get it right then it can be very exciting. You spent five years in development before you launched.

Was there a point after three or four years where you thought that you should just get something out there?
Interestingly, there was never a point where we thought that we have to get this out there because we felt that we had to get this right. However, throughout those five years we had a very painful time because your wife is saying to you, “Is this some dream or are you ever going to sell watches? Is it a passion or is it a career?” and then you start doubting yourself. We knew that when we showed hardcore watch journalists around the world our original collection containing our first few watches, they would pick it up and say, “This is really nice and for the price it is a bloody good watch”. That is the only reason why we have grown as a brand, because we are giving a hell of a watch for the price and everything we have done we haven’t done with a history of being in watches, so we thought out of the box because we had to think like that.

Do you get parts from the UK as well?
All the cases are finished in the UK; all the rotors are built in the UK now so there is more and more being done due to printing dials. It is a slow process because we have to do it all from scratch.

What is cost of making a watch in England as opposed to Switzerland?
Getting the components made is more expensive, because they are so specialised. Watchmakers are about half the price in Switzerland as compared to the UK. What happens in Switzerland is that you have great watchmakers who are trained… and then Rolex or someone similar just nicks them. In England, we have got this Henley apprentice scheme where we are training young guys. It is quite an art; if you are a trained watchmaker then you earn a lot of money and there is a complete lack of them. Historically all these guys went into the steel industry, but if they’ve got that talent, are trained, have that eye for detail and if they can do it over and over again then it will work. If you see a Zenith watch put together in Switzerland, they generally get housewives who work two hours on and two hours off and one housewife will put the crowns in while the next one will put the crystals in. We don’t do it like that; we have our twenty watchmakers who are building the whole watch from start to finish. It does take longer, but we feel that it is a better way of doing it for us.

Is it tougher for watch brands of your size in the in the industry at the minute, or is it getting better for smaller brands?
It was really tough; we are now at a size where we have a bit of clout, because we a bit are bigger. There are a lot of brands out there who are probably selling 2,000 watches a year and it is hard up to that size. When you go past 4000, suddenly you have got a bit more weight.

Do you look for gaps in the market or do you go with the current trends that everyone else is following?
I do not know what anyone else is doing. You get some feel from the market whether they want slightly bigger or slightly smaller watches and new technologies come along which people start adopting. As for design and philosophy, if you start looking at what other people are doing then you become a fashion brand and we are certainly not a fashion brand. You really cannot listen to anyone else because if you do then you become wishy-washy as a brand. I am designing this because this is how it looks and you either like it or you don’t.

If you get your presence out here, it will help you there as well won’t it?
We were at the Doha watch show and sold a Victory watch to the Prime Minister. It is a selling watch fair for the royal family, but it is not like a Basel. I don’t like Basel and for us to do well there we would have to spend about half a million quid. Furthermore, everyone comes in looking glazed, because they have all seen a hundred other watch brands before us and frankly you do not want to see another watch. It is just another guy saying that “this is the best watch in the world” and it all just goes in through one ear and out the other, so for a brand like us it is a difficult thing. Clearly you are not going to pay big names millions and millions of dollars to wear your watches so it must please you to see famous people with a Bremont on their wrist. It makes me happy because when I see I big brands paying millions to people I know that those are millions are coming off their balance sheet. We knew that we could never do it in the first place, so we have never offered and never given our watches away. As for Tom Cruise, Hugh Laurie and all those other people, these are just guys who like their watches and bought one of ours. We’re too small a company to pay. They wear them because they like them.