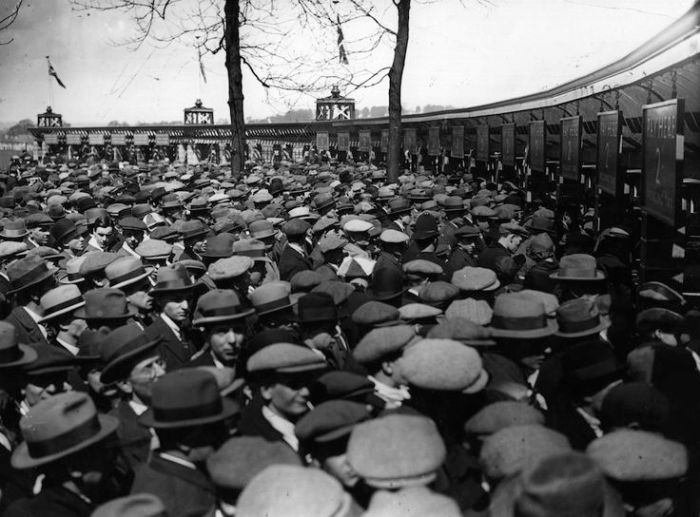 The above picture from the 1923 English FA Cup Final (between West Ham United and Bolton Wanderers) shows all but one man wearing a hat. And the hatless man had probably just removed his to scratch his head as the photo was being taken. So why did the vast majority of men stop wearing hats whenever they were outdoors?

Hat-wearing was at its peak from the late 19th Century until the end of the 1920s, when the practise began to decline. Nobody, however, has pinpointed one sole reason why this happened, but there are several key things are that are strongly believed to have contributed.

The most popular attributed cause is the rise of closed cars and other transportation. As covered cars became more popular, the necessity for a hat diminished. With low roofs meaning you couldn’t wear a hat while driving and generally had no need to cover your head anyway, personal transport often negated the need for headwear.

Looking at US figures, in 1920 less than one percent of the population owned a car. By 1940, that rose to around one-in-four people. By 1970 it was fifty-five percent. Men still bought hats, but they weren’t worn as regularly as previously when the majority of people walked everywhere, rode horses or travelled in open carriages. The rise of the car also meant fewer people were using public transport, so there was no walk from home to the train in the drizzle — you were covered by the roof of your car.

Another theory posited suggests that the hat suffered a serious decline after the end of World War II because it was an unwelcome reminder of the time people had spent in uniform. Men who fought did not want to wear hats with civilian clothes after the war. A 1947 survey for the Hat Research Foundation (yes, a real entity) found that 19 percent of men who did not wear hats gave “because I had to in the army” as the main reason.

The previous year, the Hat Research Foundation had tried to arrest the decline, having taken out adverts claiming “You Need A Hat To Work Magic” and there was clearly a promotion drive. The hat industry initially believed going without one was a fad, with newspaper reports in 1948 bemoaning the new “barehead” fashion, but they soon realised the decline could be permanent.

In England there were even reports of people who dared to walk bare-headed in hat-making towns (such as Denton and Stockport near Manchester) being abused by workers who saw their livelihoods being threatened.

Indeed, using the FA Cup final as a barometer again, this fear seems to be borne out. A photo from the 1948 FA Cup final between Manchester United and Blackpool shows more fans without a hat than with one, and it’s worth bearing in mind that they were all standing in an uncovered stadium with no protection from the rain, so a hat would actually have been a sensible idea at that point.

In 1953, columnist Hal Boyle (during National Hat Week) suggested they may be on the way out because people “hate to part with two bits to park their pork pie [a type of hat] every time they go to a nightclub” and warned that the hat may be “…going the same way as vests and high-button shoes”. The fact that those with commercial interests invented a National Hat Week suggests Hal may have had a point – though of course the decline was more gradual, as some of the older generation carried on wearing them out of habit.

The general belief is that when a formerly functional item of clothing becomes purely decorative, it usually doesn’t last more than a generation or two. But that wouldn’t explain why the tie remains a requirement for many offices — perhaps its demise is yet to come.

Hats are still around of course, and one style is currently popular. Right now baseball caps are “on trend” and sales are soaring, with Top Man reporting a 26 percent year-on-year increase in sales, and online retailer Asos saying sales have more than doubled.

Meanwhile, anyone bar Slash wearing a top hat looks like an idiot. The last time a great man wore a top hat was John F Kennedy before his inauguration. Kennedy, however, removed it before making his speech. Many wrongly cite JFK’s speech as the great hatless moment that precipitated the decline, but in truth the decline had started years before.
For Esquire Magazine.