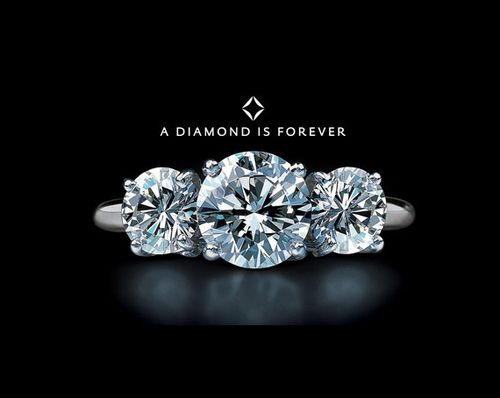 Trick is perhaps a bit too strong of a term, but diamonds are not exactly rare and it was marketing and price-fixing that made them a sought-after commodity.

There was a time when diamonds only really came from India or South America, and only small amounts were being excavated. Then in 1870 huge quantities of diamonds were discovered in South Africa and they were literally being dug up by the tonne. Given that scarcity – or the perception of it – was what kept them valuable, the mines all united under the title of De Beers Consolidated Mines.

This cartel arrangement allowed them to control the price. But in the 1930s something really interesting happened — DeBeers realised that controlling supply was essential, but they also wanted to create demand, so they hired people on Madison Avenue to change the way the public thought about diamonds.

Prior to this time, diamonds were not intrinsically linked with engagement rings, but a campaign to intrinsically link the gems to the idea of romance and worth was launched. The N.W. Ayer advertising agency planted news stories about film stars flashing diamonds to “show their love”; ran full-colour ad campaigns with pictures of diamonds next to famous works of art to create a perception of value; invited Queen Elizabeth to the mine and presented her with a diamond and even gave talks in school assemblies (to thousands of girls around the country) about diamonds.

Then in 1948, De Beers adopted the slogan, “A diamond is forever.” It was a clever line that sought to encourage people to hang onto their jewels and thus prevent a second-hand market growing and taking control from DeBeers. With so many more diamonds being bought, DeBeers knew that if the public then started buying and selling from each other it would hugely undercut them. After all, a second-hand diamond looks just as good as one bought from a shop.

To this day, diamonds are still a terrible investment. If you try and sell one, expect to get around 66 percent of what a jeweller would pay wholesale. Given their mark-up is about 100 percent, you’d get roughly $330 for a stone you bought yesterday for $1,000 — if you’re really lucky.

By the end of the 1950s N. W. Ayer said to DeBeers: “Since 1939 an entirely new generation of young people has grown to marriageable age… to this new generation a diamond ring is considered a necessity to engagements by virtually everyone.”
Job, quite spectacularly, done.

It had worked so well that DeBeers used the same technique in Japan during the 1960s, with equal success. Centuries of Shinto law and cultural ways of courtship were swept away as marketing had created their new diamond-based “tradition” out of nothing. By 1981, around 60 percent of Japanese brides wore diamonds.

In 1932, worldwide diamond sales were around $100,000, but it’s now a $7billion industry. In 2000, Advertising Age magazine named “A Diamond Is Forever” the best advertising slogan of the twentieth century, and it really was a staggering piece of clever manipulation.
DeBeers, however, isn’t quite the power it once was. Its global market share has fallen from 80 percent in the mid-1980s to around half that by 2006, as producers in Russia, Canada and Australia have discovered big deposits and refused to join the cartel. Last year, a diamond field at the impact site of a meteorite in Siberia was made public. The Russians have known about the site since the 1970s and its deposits far exceed known global amounts.

Diamonds, as many have known for decades, are not quite such a rare commodity after all.

These diamonds, however, will be for industrial use rather than jewellery, just as artificial diamonds have been used for years. The new ones, made by chemical vapour deposition, are both cheap to produce and virtually indistinguishable from natural diamonds, even in the lab. Wired magazine ran an article in 2003 that saw an industry expert value a diamond at $15,000, only to be told it was made for under $100 in a lab and was chemically perfect and utterly identical to a natural stone.

The next big use for diamonds will be as thermal conductors in computer chips. This is because the chips are now getting faster (and therefore hotter) than silicon can handle. Thus, there could soon be a time when a woman is on Skype showing off her engagement ring to a friend, while the diamonds in her computer are just as chemically pure as the one her fiancé just handed over a months’ wages for from a jewellery store.

Thanks, in no small part, to the very clever marketing ideas that an advertising agency and the diamond industry came up with in the ’30s and ’40s.