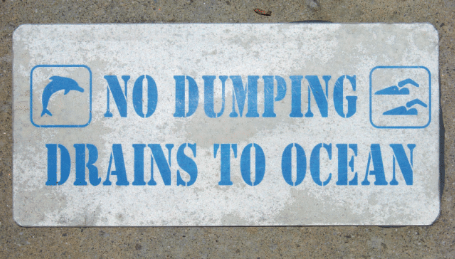 Incredibly, there actually is and it’s known as the Great Pacific Garbage Patch, although it’s not technically an island and it’s not visible via satellite photography. It is, however, a staggering floating monument to waste.

The huge mass is, by some estimates, as big as eight percent of the entire Pacific Ocean but was only discovered by chance in that late 1990s. A man named Charles Moore was heading home to America after a sailing race in Hawaii and decided to head out into the area known as North Pacific Subtropical Gyre.

This area is generally avoided as it’s a high pressure zone with a vast swirling vortex of warm equatorial air that pulls in winds, making it less than ideal for sailing. The coriolis effect of the planet also creates a clockwise spiral of currents, the centre of which is highlighted in red on the map below. These currents drag in most of what’s floating in the sea, all the way from the Pacific coasts of Southeast Asia to the West and North America, Canada and Mexico to the East.

What Moore discovered was all the floating waste that had gravitated to this point in the ocean. The Pacific makes up one-third of the Earth’s surface, and with the gyre slowing drawing in all this rubbish, it had created a vast floating soup of garbage.

Half a century ago the majority of this debris was biodegradable, but now ninety percent of it is plastic. Plastic doesn’t biodegrade but it does photodegrade, so years of exposure to sunlight breaks down the polymer chains into smaller parts. The buffeting of the waves also contributes to this process, with catastrophic results.

“The vast majority of plastic pieces in the North Pacific Gyre are less than the size of your fingernail,” explains Miriam Goldstein from the Scripps Institution of Oceanography in San Diego. “When you actually go out there, the ocean just looks like ocean — it’s only when you tow a fine-meshed net that you can see the millions of confetti-like pieces of plastic. There’s no dense island of trash.”

Cleaning up this mess would therefore present a huge logistical problem: “The plastic is the same size as much of the marine life and spread over a vast area — the North Pacific Gyre itself is about two and a half times the size of the United States. So in order to remove the plastic, you’d have to burn a lot of fossil fuel and remove a lot of marine life.”

The fact that we are polluting the sea with garbage is not news. Even back in 1975, the National Academy of Sciences estimated that ocean-based sources, such as cargo ships and cruise liners, had dumped 6.4 billion kilograms of garbage into the ocean. But recent research from the United Nations Environmental Programme estimates that around eighty percent of the plastic currently in the sea comes from the land rather than ships.

Rubbish in streams, rivers, outlets and storm drains all eventually leads to the sea where it floats out and slowly gets caught in the huge currents that drag it towards the gyre. We’ve seen examples of this in the past in Dubai when a heavy rain storm washes out the storm drains and garbage spews out onto the beaches and into the  water. According to Greenpeace, the world produces 300 billion pounds of plastic every year and about ten percent of it ends up in the ocean. In the North Pacific Central Gyre, there’s an average of 334,271 pieces of plastic per square mile, according to study by The California Coastal Commission.

The United Nations Environment Programme says plastic is killing a million seabirds a year and 100,000 marine mammals and turtles; mostly by blocking digestive tracts. Cigarette lighters, tampon applicators and pocket combs are among the items that have been found in their stomachs.

The effect of the confetti-like plastic in the gyre is, however, not fully understood. Pollutants (specifically, persistent organic pollutants like PCBs and DDT) are known to stick to plastic — the technical term is adsorb. And plastic particles from the ocean can have concentrations of pollutants up to a million times that of the surrounding seawater. “We also know animals such as seabirds and small fish are eating the plastic particles, but what we don’t know is whether eating plastic means that these pollutants transfer to the animals’ tissues,” Goldstein says. “One laboratory study done in bird chicks shows that this can happen, but we don’t know to what degree it’s happening in the open ocean.”

What we do know is the open ocean is increasingly turning into a vast garbage dump, out of sight and not even visible by satellite photography. But it’s hereon land that the problem needs to be fixed according to experts like Goldstein: “Most people who work on this issue agree that it’s far more effective to stop plastic from getting into the ocean in the first place.