It opened in 1887 and was named after Singapore’s English founder, Sir Stamford Raffles; 125 years later it’s still one of the finest hotels this side of the world. Described in 1905 by a London newspaper as “The Savoy of the East” it has remained a bastion of aged refinement.

Raffles Singapore started as a single bungalow near the beach and had a panoramic sea view for its first two years until land reclamation changed the surroundings. It’s now about five-hundred metres from the sea, and over the years the hotel itself has grown and gone through several refurbishments.

The neo-Renaissance architecture marks it out as a symbol of colonial elegance, although it was also one of the most advanced hangouts in its day — it was the first place in Singapore to have electric lights and fans. These days there are, sadly, mall-style electric escalators leading to a shopping arcade, which ruins the period setting on the outer edges of the courtyard. But that aside, it’s an oasis of authenticity in a city that keeps pushing modernity, and manages to retain most of the essence of what made it great.

It is also rich in history. The last surviving wild tiger in Singapore was shot by the head master of the Raffles Institution in the Long Bar on August 13, 1902. The story goes (and it may just be a story) that it wandered into the bar and met its end, although some accounts say the shooting took place under the hotel’s raised Bar & Billiard Room. Either way, the notion of a wild tiger wandering in and a stoic head master saying something along the lines of, “It’s alright chaps, I dealt with one of these blighters in Burma — hand me that rifle” engrains a spirit of the old Singapore on Raffles Hotel.

Later, in the ’30s, movie star Douglas Fairbanks bet someone they couldn’t hurdle every table in the ballroom without tipping over a single wine glass. Apparently, and with the aid of monkey-gland tonic, they did manage to do it. The Long Bar, now tiger-free, was also the origin of the Singapore Sling, created in 1915 by barman Ngiam Tong Boon. If you’re after one today, note that the bar often has them pre-made and waiting, so go at a quiet time and ask the barman to whip-up a fresh one for you.

Rudyard Kipling was here in 1889 but wrote, “The food is excellent and the rooms are bad. Let the traveller take note. Feed at Raffles and sleep at the Hotel de l’Europe.” Somerset Maugham lived here in the ’20s and ’50s and wrote The Moon and Sixpence in his suite overlooking the Palm Court. Presumably he thought more of his room than Kipling did, describing the hotel as having stood “for all the fables of the Exotic East.” Joseph Conrad, Ernest Hemingway and William Golding are also among those who resided here, and in their honour the Writers’ Bar has some of their photos and work to sit and enjoy while draining a long G&T. It’s what they would have wanted. The steakhouse on site is one of the finest —and the most expensive — in the country. But, unlike in Kipling’s day, it’s not the food you really come here for, it’s the grand setting and history.

In April of 2010 it was reported that the hotel had been sold to Qatar’s sovereign wealth fund for $275million, thus returning it to Arabic ownership — the original owner was Arab trader and philanthropist Syed Mohamed Alsagoff. Despite the buyout, one of several over the years, the hotel remains an institution that’s as much a glorious time machine as it is a fine place to stay.

The Tiffin Room only got its name in the mid-1970s (from the Anglo-Indian word for a light lunch), but its tiffin curry has been served here since 1899, back when this elegant room was simply known as the dining room. The sandwiches and cakes (including the hotel’s famous mooncakes) that make up the traditional High Tea are way overpriced, but it’s hard to fault the quality as white-jacketed waiters attend to your late afternoon needs and make you feel like you’re in a period drama. 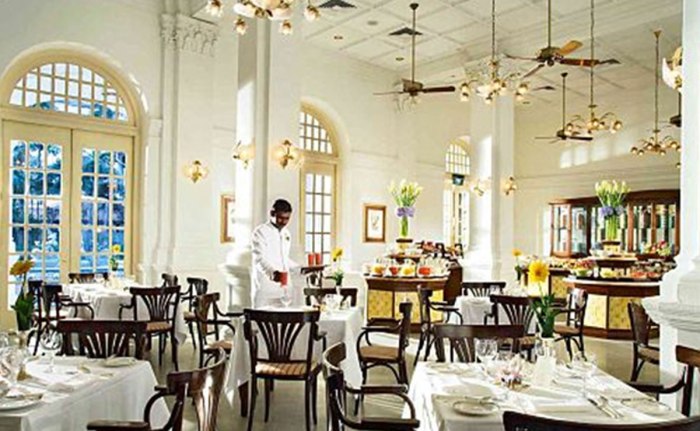 The Long Bar is now in a slightly different location to where it was originally built after being moved during renovations (it was originally in the lobby where the Writers’ Bar now sits). But the spirit of the bar lives on as the monkey nut shells cover the floor, fans gently waft and rounds of the famous Singapore Slings are downed long before the sun is over the yard arm. 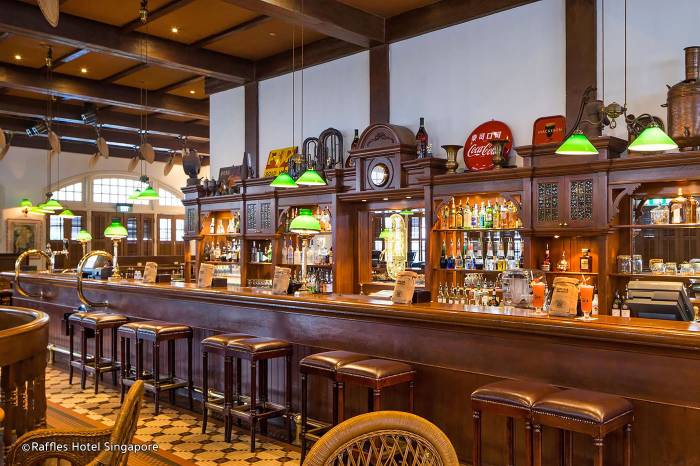 Somerset Maugham Suite — room 78 — was named after former resident, W. Somerset Maugham. The English writer was one of the highest-paid in the ’30s and made famous for his accounts of Western (mostly British) colonists in the Far East at the dog-end of the British Empire. His chronicles of the last days of colonialism in India and Southeast Asia contain themes still relevant to Western expats today. 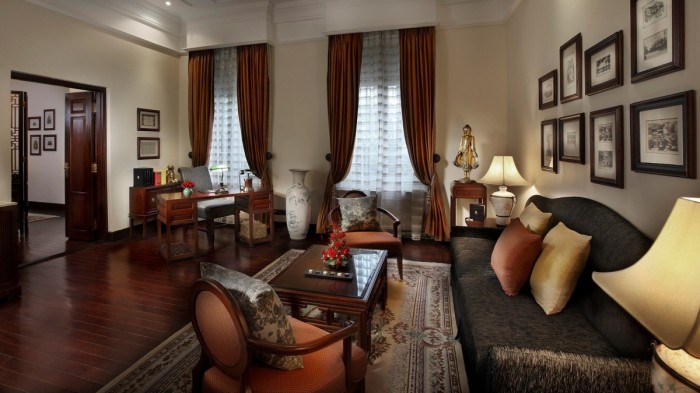