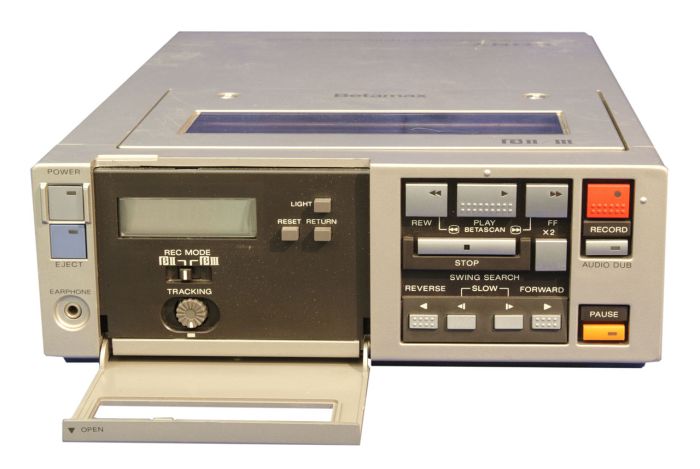 This is the popular legend as to why VHS won the home video recording format war in the late seventies and early eighties, but it is almost entirely false. There were blue movies available on both VHS and Beta cassettes, with the adult industry releasing films in both formats to maximise potential revenue.

Here’s the real story. Sony’s Betamax video was introduced in 1975 and a year later JVC followed with VHS. Other manufacturers took a gamble on one system or the other.

Originally it didn’t seem to be a huge problem as many people assumed that both formats would coexist. Indeed, in 1977 one American publication declared: “Eventually, the public learned to live with two record speeds [331⁄3 and 45 rpm], and doubtless it will also resign itself to two videotape systems.” Of course, that didn’t happen.

When first launched, the Beta tapes could only record up to sixty minutes, while the VHS tapes had a recording time of three hours, meaning you could record a whole film. Betamax released longer tapes soon after, but the damage was done. Then VHS started making four-hour tapes, which was a key factor for the U.S. market as it meant American Football fans could record an entire game.

What Betamax did offer was better quality, but as many people still had small TV sets and were often using “bunny ears” aerials, the improvement was barely noticeable.

This superior format also cost more. The Betamax was a hefty $2,000, which, though cheaper than the recorders that had preceded it, was more expensive than the VHS model which retailed at $1,280. Additionally, VHS tapes sold for $50 apiece compared to $55 for Betamax. Given that early models were prone to chewing up tapes, it was often an infuriating and costly process. Still, the five dollar discount worked: in its first year, the VHS format took forty percent of the business away from Sony.

So the cost — as is often the way — came to be the defining factor.

The late seventies also marked the start of the video rental industry — something that is currently in its last throes — and these stores were stocking both formats, as well as Laser Discs once they were introduced. To hire a film on either format was a costly $10 to begin with, and even into the mid-80s films were not getting to video anywhere near as quickly as they do now and to own a copy would cost around $80.

But once it was becoming clear that the VHS system was winning out, rental stores naturally began stocking fewer numbers of Beta tapes to reflect the demand from the public, which created a negative feedback loop of demand for Betamax. The price war was on.

In 1984, the price of a Betamax video was roughly half that of a VHS system and it was Beta’s most productive year with 2.3 million units manufactured worldwide. But it was too late for a mass revival. Most people refused to switch and by 1987 VHS players accounted for ninety-five percent of the VCR market. Betamax limped on until 1993 when production in America ended. VHS stood alone victorious.

As a footnote, three years ago Newsweek ran an article pointing out that HD-DVD, backed by Toshiba, and Sony’s Blu-ray discs are battling it out in much the same way that Betamax and VHS did in the 1980s. Newsweek erroneously claimed that “Once again, there are early signs that one type of disc — HD-DVD — is emerging as the format of choice for the adult entertainment industry, which raked in $3.6 billion worth of video sales and rentals in 2006.”

In actual fact, production of HD-DVDs has ceased. Blu-ray won the battle and the adult industry had little impact either way, largely because it is failing — regardless of format — due to freely available X-rated material on the Internet.