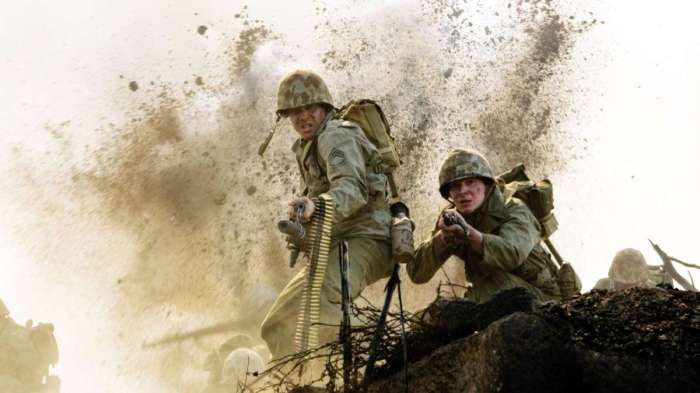 If you ask people who’ve fought in a war, they’ll often tell you that it’s not like it’s portrayed in the movies. For a start, the noise is different. Hollywood creates the noise people think war sounds like and gives them that audio experience, rather than what you really hear among the bodies and bullets. It’s like when you first witness someone getting punched hard in the face and you realise that it sounds nothing like it does in cowboy films. Filmmakers insist that if they made war films too realistic they wouldn’t be as entertaining for the masses. But then Steven Spielberg and Tom Hanks did — millions watched and loved Saving Private Ryan.

The opening 25-minutes of that film, with troops landing on Omaha beach on D-Day, was lauded by those who were there as the most realistic portrayal of their experience they’d ever seen. Five Academy Awards followed. Then in 2001, Spielberg and Hanks produced a ten-part mini-series called Band of Brothers. It followed a company of soldiers from training to the D-Day landings (this time by parachute) and on to the battle through Europe. The story ended with the liberation of the concentration camps and the end of the war. It stands as one of the finest pieces of television ever made – war related or otherwise. Six Emmy awards followed. Now Hanks and Spielberg have teamed up again for their mini-series Pacific, which is once more set in WWII but this time the other side of the world.

Starting with the attack on Pearl Harbor, it follows the real-life journeys of three U.S. Marines – Robert Leckie (James Badge Dale), Eugene Sledge (Joe Mazzello) and John Basilone (Jon Seda) – across the Pacific Theatre of Operations, including the East Indies, New Guinea and the Solomon Islands.

From their first battle with the Japanese on Guadalcanal, through the rainforests of Cape Gloucester, to the sands of Iwo Jima via the horrors of Okinawa, the ten-parter has been put together with high production values that ran up a bill of $150 million — $20million more than its lauded predecessor.

Don’t think it’s about the expensive effects though, as this is very much about the fact-based narrative. The story is based on the books Helmet for My Pillow, by Robert Leckie, and With the Old Breed, by Eugene B. Sledge, with additional material from interviews conducted by the filmmakers. Again, the creators have used first-person accounts from men who did the fighting, rather than vague official reports from the men who sent them.

More violent than Band of Brothers (dismembered limbs, Marines cutting gold teeth from dying Japanese, etc.) it stays faithful to the texts it’s based upon. The penultimate episode, from The Sopranos director Tim Van Patten and set on the island of Okinawa, is reportedly one of the most harrowing depictions of war yet filmed. They’ve been able to show this largely because it’s a HBO cable series, rather than a mainstream studio one.

Like Band of Brothers before it, there’s a sense that this is more than just a TV mini-series. This is Spielberg and Hanks once again turning real events from history into beautifully crafted and essential viewing that doesn’t eschew accuracy for mindless entertainment.