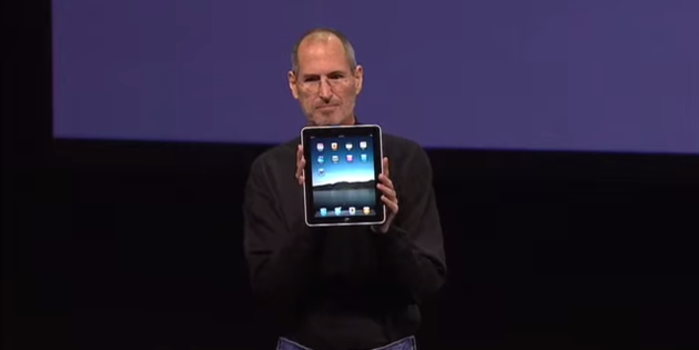 Why the new iPad may provide a revolution in piracy as well as literature.

For all the anticipation surrounding Apple’s latest hardware, the iPad doesn’t really offer us anything we haven’t already got on laptops and iPods. There is one feature, however, that Apple believes will be revolutionary: digital reading. The iPad goes on sale this month, and iBookstore – the literary equivalent of iTunes – is expected to open at the same time. Apple has already inked deals with five of the six major U.S. publishing companies – Penguin, Macmillan, HarperCollins, Simon & Schuster and Hachette. Apple is fully aware that the American book industry alone has a $24 billion yearly revenue – nearly three times the size of the music industry.

This lucrative market exists because people don’t currently download books for free in any great numbers. In fact many popular books aren’t even available in digital format. This means the Harry Potter series has been able to sell over 400 million physical copies worldwide. So how will the iPad and other digital readers affect those kinds of book sales? Potter author, J.K. Rowling, stated in 2007 that there would be no e-versions of her books. This, she said, was due to concerns about online piracy, coupled with her wish for readers to experience the books in their intended format.

Piracy is the one thing nobody, publically at least, is talking about – and Penguin’s e-editor refused to comment when we contacted them. But it has a problem. If e-books take off in a big way, hacked copies will surely appear online within hours, because the cheapest way to get hold of an e-book is to steal it via a BitTorrent site. The record industry knows this problem only too well.

Even though iTunes accounts for 70 percent of music purchased online, only 2.5 percent of all downloaded tracks come from legal sites. Contrast those Harry Potter sales with the best-selling album of the previous decade: The Beatles’ 1 sold 11.5million copies – and that was in 2000 before iTunes took off. Likewise, the film industry loses billions each year – last year’s Star Trek film was illegally downloaded over 10.9 million times according to torrentfreak.com.

Most e-books currently available from BitTorrent download sites are technical computer manuals – although the Kama Sutra was the most pirated book last year, followed by Adobe Photoshop Secrets and then The Complete Idiot’s Guide to Amazing Sex. But it’s not just sex-obsessed photo editors who are downloading: the complete Twilight book series also featured in the top ten list. While pirated books are usually just PDFs of page scans, proper e-books are now appearing. And with the inevitable popularity of the iPad beckoning, demand will soar to match. No wonder J.K. Rowling was concerned.

The obvious way to offset this downside it to make the books very cheap. Amazon have refused to disclose the number of Kindle book readers sold, although there have been suggestions that it’s probably not as many as they’d hope for. To help drive sales, they’ve been selling at discounted prices, with top e-book titles available for $9.99. Amazon reportedly pays publishers more than that for some books.

Apple thinks it can change this model. It will enter the market with a new pricing strategy – the publishers name their own price and Apple take a percentage. This means the arrival of iBookstore could kill off the Kindle. Amazon, still the most powerful distributor of paper books, is understandably starting to panic. Recently (albeit briefly) it pulled MacMillan books from sale over disagreements about discount pricing. According to a statement by Macmillan CEO John Sargent: “Our disagreement is not about short-term profitability but rather about the long-term viability and stability of the digital book market.”

Whoever gets the biggest market share, some tough questions lie ahead. Apple, Amazon and the online publishing industry, need to convince people that electronic readers and books are better than paper ones. But if they do so, they’ll probably create a huge pirate download market. The overall effect on profitability remains to be seen, but either way, it will be a watershed moment for publishing and how we consume literature.