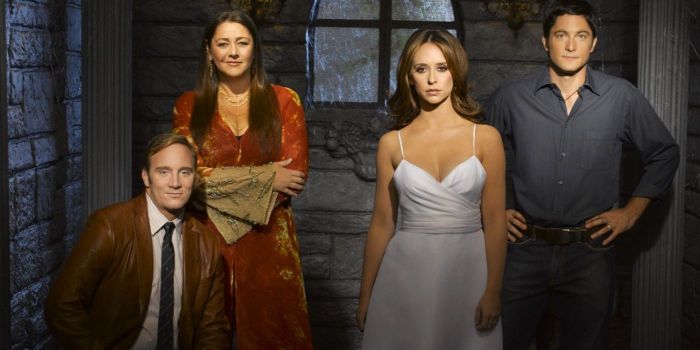 As season four of Ghost Whisperer starts, we speak to Jennifer Love-Hewitt about getting into character. Interview Matt Pomroy

How do you see Melinda, your character, after four seasons?
Different. She’s changed a lot. In the first season she was very vulnerable and new. Fresh off the medium boat, I guess, and focused on forgetting her gift and trying to just be a good wife, antique store owner and apologetic to people. I think during the second season she got a tougher skin and was a little fed up – especially after the death of her best friend – as to why there was so much evil lurking around and trying to get her. In the third season, she got feistier and set in the fact that, as long as there was a dark side, there was going to be a light side that would fight it until the end. And now this season, she’s been very broken. She’s had to not just help grieving people, but she’s had to be a grieving person. So she’s been through a lot, but she’s full of faith.

What was the public’s reaction to your husband dying in the show?
I met a lot of angry people after he died. I got yelled at a lot in public. Like in the lettuce section of the grocery store, this woman came up, and she’s, like, ‘What is wrong with you? What is wrong with your show?’ And I’m, like, ‘Well, I’m buying lettuce. What do you mean?’ And she goes, ‘Is it because he couldn’t give you a baby? He couldn’t give you a baby, and you just kill him off.’ And I’m, like, ‘It’s OK, lady, it’s going to be fine. Just keep watching.’

Do you always have the patience to answer questions from fans?
Sometimes. It’s just that sometimes they get very aggressive, you know. That’s the one thing that has been interesting about this job – I tend to meet a lot of people in extreme grief who believe that I have some ability or some connection that I can give them. And so that part of it is tough because it’s not just, ‘Hey, I really like your show,’ and ‘Can we take a picture?’ It’s ‘I need an extreme amount of your focus and your time and your effort right now to be with me because I’m hurting, and you have to fi x it.’ And it’s a very humbling moment because you realise, I’m just an actor, and I really don’t know how to help you.

What do you say?
I usually try to give them contact information for some of the mediums that we work with on the show, so that they can hopefully get help that way. I try to tell them what Melinda has always said, which is that you choose when love dies. It doesn’t die when somebody dies; it’s up to you how long you keep somebody alive inside. So I try to give them Melinda’s wisdom, if I can, before I go. And sometimes that’s good enough, and sometimes it’s not, you know.

You said your character is broken and grieving. How does that affect you personally?
It was definitely strange; it hit me hard. There were three episodes that were just crying all the time and I feel a lot for Melinda – she’s somebody whose soul and heart I have vibrated in now for a long time. So, to me, she feels like my best girlfriend in some way and I did feel a sense of genuine heartbreak and loss. It was very strange to look at David every single day and be playing this woman who’s so in love with him. When we did that scene where he was shot, it was very difficult. It was weird to see him bleeding and to know that he wasn’t going to be around in the same way as before, and that I wasn’t going to be talking to Jim anymore.
What do you do after these moments?
I would go home and just kind of chill out. I like to cook. Cooking for me is a good place to just sort of put that. But actually, when we were doing the first few episodes with him, I’d watch the scenes with Jim and Melinda when they were at their best. It helped me get in the place for the crying scenes, but it also sort of helped me go, ‘They’ll be back. It’s cool’, you know?

Have you had any otherworldly experiences yourself?
Some people do, some people don’t; but I believe in it. It’s hard to know, when you work this many hours, doing this stuff all day, if the noise that you hear in your hallway is something, or if you’re just exhausted and used to hearing noises all day. So, would I say that there have been times when I have had what I perceive is a supernatural experience? Yes. I’m hesitant to go into it too much because somebody else might go ‘take a vacation’.

Is the gift your character has a blessing or a curse?
For Melinda it’s both. With the mediums that I’ve been able to spend time with, any job is a blessing and a curse at the same time. It must be incredibly fulfilling for a medium to
see loved ones have closure and to see them say goodbye. I always get very moved by it when we do it on the show. To have that ability to bring that kind of peace to somebody must be so unbelievably satisfying. But to always have to deal with death when you’re trying to live has got to be a curse.