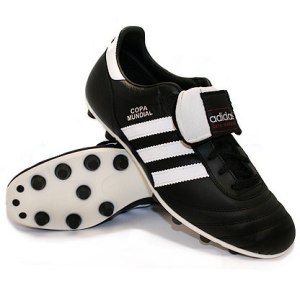 Footballer’s boots are now big business, with the top players getting paid millions to wear the manufacturers’ new products, but it’s getting a little out of hand. From the bright green Nike Steam II to the bananalike Puma V5 it seems that many modern boots have the unprecedented ability to make you look like a futuristic circus clown.

In the English Premier League the most worn boot is the Nike Vapor, but as footballer David James revealed at the start of the season, “You ask any seasoned pro — off the record — what their favourite boots are and most of them will name that 1970s design classic, the Copa Mundial.”

Sponsorship means that more and more players wear boots for the money from sponsors rather than the ones they really like, but it’s no surprise that the Copa Mondials are the most popular. Originally released in 1979, they were designed especially for the 1982 World Cup and have become the best-selling football boot of all time.

The basic design has remained the same since the late 1970s, when Franz Beckenbauer used to attack-from-the-back while wearing them. Renowned for their comfort (especially the moulded stud version which is like a slipper) they were beautifully simple in design and lasted for season after season.

Adidas know this, and their new AdiPure boot harks back to that comfort and simplicity, but the Copa Mundials are still available now and for Dhs480 they’re cheaper than many new designs. As well as looking fantastic, they’re still the preferred choice of the men who get paid to play… even if those pros sometimes wear otherwise.
From Men’s Fitness, December 2008