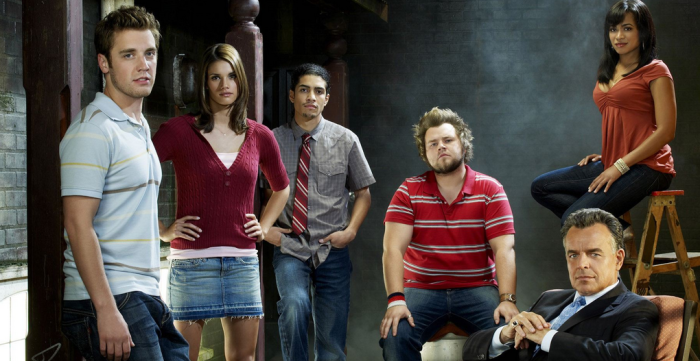 Tyler Labine, a former garbage collector and the man being touted (by us) as the next Jack Black, currently plays the goofy best friend in Reaper – one of the funniest characters on TV right now. We met him in Los Angeles. Interview Matt Pomroy

How did you and co-star Bret Harrison set up the chemistry between you two, because that’s the heart of the show?

Thank you. You know what? That’s nothing that you can anticipate or control. We met. I’m from Vancouver and I moved back there to do the show, and everybody was coming into the city and I wanted to be a good ambassador and show them around. But Bret came in first, and we just went out and we hit it off right away. And we’ve had a torrid love affair ever since. [Laughs]

There’s definitely something of a bromance going on…

Totally; it’s one of those things that is such a gift when you meet your co-star and you know you’re supposed to exude this kind of camaraderie and this sort of natural chemistry. And if you don’t have it it’s so hard to force that, but I didn’t have to with Bret. And I still get to do that now. I didn’t have to with anybody – with Bret, with Rick, with Missy, nobody. It was a real blessing.

Kevin Smith directed the pilot episode and allowed you to improvise a lot – do you still get to do that now?

Yeah they kind of gave me carte blanche after the pilot. They were like, ‘You know what? We know that’s what you do so just roll with it.’ But they also have a script supervisor that just follows me around going, ‘Um, that’s not right, Tyler, I don’t see that.’ But Kevin really encouraged me, he would be behind the monitors just making up stuff and yelling it out to you and I could just yell back to him like, ‘Oh, I got something. I got something…’ If you heard giggling behind the monitors, you know that you’d done something right. So he was really cool and it was a really great collaborative effort on the pilot.

It’s a typical Kevin Smith environment with slackers in a dead-end job, but what was your worst ever job?

My worst best/worst job was as a vocational worker at a recycling depot in Maple Ridge in Canada. I had to basically teach people with mental disabilities how to ride on the back of a recycling truck, pick up garbage and put it into the truck. I had to do it as well. [Laughs] But you would be amazed at what people try to recycle. It is pretty unbelievable. Like, dirty diapers? Yeah, yeah, we can really reuse that. But people kept falling off the truck so I’d be banging on the side, ‘Stop, stop, stop, Bruce fell off the truck again.’ I laughed a lot but we became friends.

That’s a comedy film right there

A million great stories and 10 great characters right there and they all became kind of my buddies. And I really liked it, but riding around on the truck and picking up the ridiculous things that people try to recycle and people falling off the truck got to me after a while. I used to have nightmares about little blue recycling boxes flying at me faster than I could collect them and wake up sweating and reeking like garbage. The best part was that you get 45 minutes of the day where all you have to do is break stuff with ice hockey player aggression. I had this giant bin and all these glasses and that was awesome and… dude, I’m really going on about my recycling job here. [Laughs]

As a Canadian, you must like ice hockey. Who’s your team?

Vancouver Canucks, all the way man, but you know what? I was actually ostracised by all of my friends growing up, because I didn’t like hockey back then. I was a baseball guy. I moved to Vancouver when I was 13, and the Canucks and Toronto were playing and I was not rooting for anybody, and my friends broke my pinky toe and threw me down a set of stairs. I realised then very quickly that maybe I should try and work up an interest for hockey just for my own safety.

So how would you like to see the show progress?

I would love to open up the idea that my character ends up meeting the Devil, because I can’t be on the show with Ray Wise [who plays the Devil] and not be in a scene with him, you know what I mean? [Laughs] And for the record, I would like to have [my character] Sock make out with Josie, his ex girlfriend in the show – I want to get that message out in print, let’s make this happen, help a bro out here.