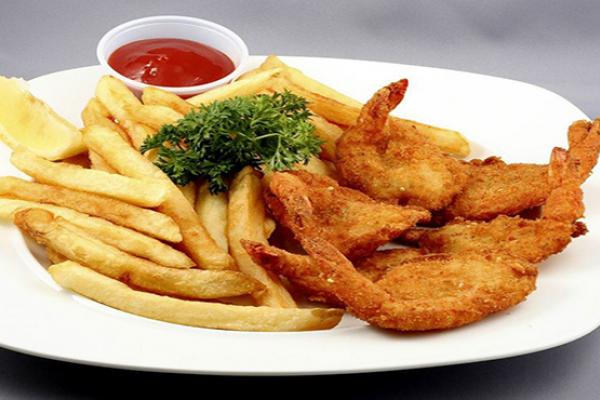 The key to happiness, I was once told, is simple pleasures. Take joy in the little things that make you happy and relish those moments. For the British, a fish and chips supper has been one of those things since the Victorian age. It’s a dish that’s might not be the most consumed in the UK (that’s now chicken tikka masala) but one that could conceivably be called the meal that typifies the Brits. Little wonder then, that with so many of them having moved to Dubai, someone would open a chip shop to cater to for the ex-pats.

The people behind this new chip shop are the same team that gave us The Rupee Room down at the Marina – the place to go for the best ‘British Indian’ curry. It’s a great curry house and a testament to what the British can do with someone else’s invention. It makes a change from sports, which the British mostly invent and then let the rest of the world do much better. Now they’ve got a chip shop and I’m reliably informed that the owners are Scottish and there’s no nation on earth that deep-fries food better than the Scottish. Not just chips or fish but also pizza and Mars bars. Say what you like about the health issues posed by this approach to cooking, but the Scots do like to enjoy their fried consumables, from cradle to early grave. Sadly, there are no deep-fried Mars Bars here (and the absence of Irn Bru is something of an oversight) but everything else is present and correct in a way that only people from one of the great working-class cities in the UK could do.

And as the name above the door implies, it’s all about the fish and chips. The cod is battered to a crisp finish, with little oil left so it’s not greasy but has that fine flavoured coating before you hit the white layered fish.  And unlike hammour, which is also on the menu, the cod is firmer and far less mushy than its Middle Eastern relative – it’s apparently all to do with temperature and pressure in its native waters.

The chips are going to throw some people, but they’re actually exactly how they should be. Not thin and crispy like fast food fries, nor too big and chunky like potato wedges but chip shop chips that go slightly soggy under duress from salt and vinegar. They’re the real deal and could have been served on a any night in Glasgow, Manchester, Birmingham or London. Here in Dubai, they seem somewhat out of place because the absence of good fish and chips in Dubai has been a mysterious oversight for a while. Sure, some places have tried but nobody had quite got it right, however it seems that here they really have recreated that part of old Albion in a place where the only other thing resembling it is the increasing number of its emigrated populace.

Of course there are downsides. It’s expensive, but that’s largely to be expected. The cod is imported so the prices go right up and for cod and chips it’s a whopping Dhs54. If you’re British, then you have to look eating here as a luxury taste of Britain, much like paying over the odds for imported magazines or wine in a restaurant. Yes, the same thing would be cheaper in Britain but your tax bill wouldn’t be – swings and roundabouts.  For everyone else, this is an authentic taste of Friday nights at a ‘chippie’ in the United Kingdom, but without punch-ups, police sirens and pouring rain.

Their meat pies are pretty much spot on too. It’s not easy to get this sort of pie wrong but presented with an open goal they firmly smash the ball home and stick curry sauce on top. The curry sauce just right and by just right, I mean it tastes just like it does in Britain, rather than being a superior creation. They’ve gone for authenticity rather than culinary aspirations and it works.

It’s a big menu and you can also order pizza, baked potato and prawn cocktails but these things don’t sit right. Call me a traditionalist, but I draw the line at fish cakes – anything else is far too elaborate. If you’re not British and have never had fish and chips from a true chip shop then I strongly recommend you try this place. If you don’t like it, just grumble, ‘Ooh, I tell thee, that foreign food doesn’t sit right with me,’ as it’s what people over there are saying about most of your dishes.

It’s not five-star dining and it may not be the healthiest food you could eat but after all, it’s not the amount of years in your life that counts, it’s the amount life in your years and until you’ve had a proper fish and chip supper, you haven’t lived. It’s one of life’s little pleasures.