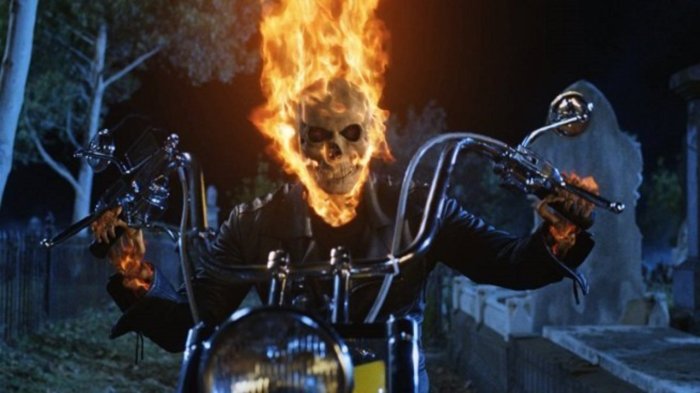 The young stunt rider Johnny Blaze sells his soul to arch-demon Mephistopheles in exchange for his father being cured of cancer. Johnny goes on to become the best stunt rider of them all, walking away from crash after crash when he should have died, but tortured by the knowledge that Mephistopheles is keeping him alive, just waiting for the moment when he calls in the favour. Then that day comes and as part of the bargain Johnny is forced to become the demon’s bounty hunter and help him collect evil souls in the guise of the fiery Ghost Rider. With as premise like that, this should be a thrilling ride, but frustratingly, Ghost Rider never gets out of first gear.

The first Ghost Rider comic appeared in 1967 and this is part of the problem. Back then leather-jacketed Johnny and his best girl Roxy, biker dudes, cowboy legends and the squadrons of tortured youths yearning to be free were all the rage. Nowadays, the script feels anachronistic and too rooted in that era. And despite Nicolas Cage looking cooler than he’s done since Wild At Heart and acting the part like a true comic book fan only could, you get the feeling that Ghost Rider is little more than just ‘The Fonz In Flames’.

When broken down, there are aspects that really work. Peter Fonda is fantastic as the devilish Mephistopheles, Sam Elliot essentially plays the same gravel-voiced cowboy character as he did in The Big Lebowski but is also perfectly cast here as the knowing caretaker. Eva Mendes though, just continues her career as ‘the one you get when you can’t afford J-Lo’ but the special effects are amazing, just incredibly well done, and as good as anything else out there. It’s a shame to see the lot wasted on this utter dog of a script.

The direction and screenplay is from the same man, Mark Steven Johnson, who wrote and directed Daredevil and scripted the spinoff movie Elektra. He’s now ruined three Marvel characters on screen – for the love of Stan Lee can somebody please stop him? (Especially as Ghost Rider 2 is already being planned). The bottom line is that this adaptation falls flat far too often and shrivels into something cringeworthy, flaccid and ultimately lacking, well, any kind of soul.